Complete the form below to receive the latest headlines and analysts' recommendations for Revolution Medicines with our free daily email newsletter:

Revolution Medicines, Inc (NASDAQ:RVMD) insider Jack Anders sold 10,000 shares of the company’s stock in a transaction that occurred on Tuesday, October 13th. The shares were sold at an average price of $44.00, for a total transaction of $440,000.00. Following the completion of the transaction, the insider now owns 10,000 shares of the company’s stock, valued at $440,000. The sale was disclosed in a filing with the SEC, which is accessible through the SEC website.

Revolution Medicines (NASDAQ:RVMD) last posted its earnings results on Monday, August 10th. The company reported ($0.46) earnings per share (EPS) for the quarter, missing the Thomson Reuters’ consensus estimate of ($0.36) by ($0.10). The business had revenue of $10.03 million for the quarter, compared to analyst estimates of $13.20 million. On average, analysts forecast that Revolution Medicines, Inc will post -1.8 EPS for the current fiscal year.

Revolution Medicines, Inc, a clinical-stage precision oncology company, focuses on developing therapies to inhibit targets primarily within the RAS and mTOR signaling pathways. The company's principal product candidate is RMC-4630, an inhibitor of SHP2, which is in Phase 1b/2 study for the treatment of RAS-dependent tumors.

Read More: What is an economic bubble? 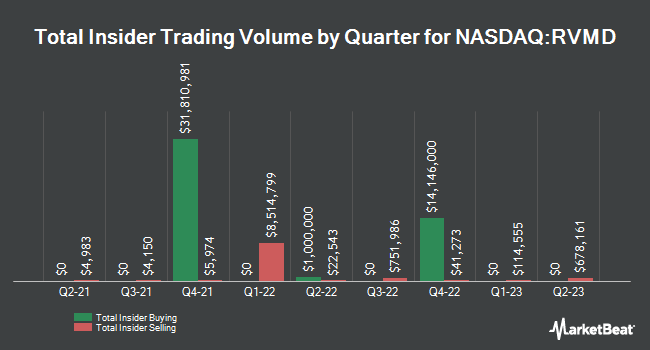 RenaissanceRe to Release Earnings on Tuesday