Daily Ratings & News for The AES

Complete the form below to receive the latest headlines and analysts' recommendations for The AES with our free daily email newsletter:

The AES (NYSE:AES) last released its earnings results on Thursday, August 6th. The utilities provider reported $0.25 earnings per share for the quarter, beating analysts’ consensus estimates of $0.23 by $0.02. The business had revenue of $2.22 billion during the quarter, compared to the consensus estimate of $2.54 billion. The AES had a net margin of 2.01% and a return on equity of 24.35%. The company’s revenue for the quarter was down 10.7% compared to the same quarter last year. During the same quarter in the prior year, the firm posted $0.26 EPS. Research analysts predict that The AES will post 1.38 EPS for the current year.

The AES Corporation operates as a diversified power generation and utility company. It owns and/or operates power plants to generate and sell power to customers, such as utilities, industrial users, and other intermediaries. The company also owns and/or operates utilities to generate or purchase, distribute, transmit, and sell electricity to end-user customers in the residential, commercial, industrial, and governmental sectors; and generates and sells electricity on the wholesale market. 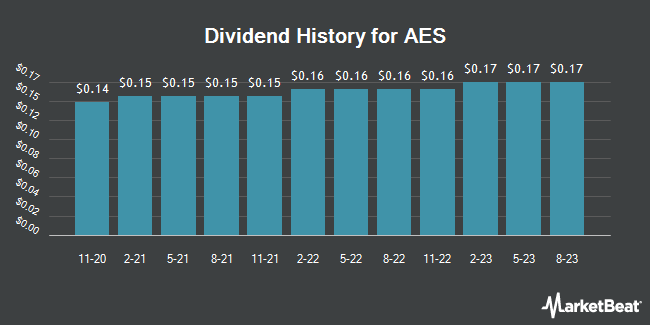 Receive News & Ratings for The AES Daily - Enter your email address below to receive a concise daily summary of the latest news and analysts' ratings for The AES and related companies with MarketBeat.com's FREE daily email newsletter.