Complete the form below to receive the latest headlines and analysts' recommendations for NXP Semiconductors with our free daily email newsletter:

The company also recently announced a quarterly dividend, which was paid on Monday, October 5th. Shareholders of record on Tuesday, September 15th were given a $0.375 dividend. This represents a $1.50 dividend on an annualized basis and a yield of 1.16%. The ex-dividend date of this dividend was Monday, September 14th. NXP Semiconductors’s payout ratio is 18.66%.

In other NXP Semiconductors news, EVP Jennifer Wuamett sold 2,505 shares of the business’s stock in a transaction that occurred on Tuesday, August 4th. The stock was sold at an average price of $120.00, for a total value of $300,600.00. Following the sale, the executive vice president now owns 6,148 shares of the company’s stock, valued at $737,760. The sale was disclosed in a filing with the SEC, which can be accessed through the SEC website. 0.56% of the stock is owned by insiders. 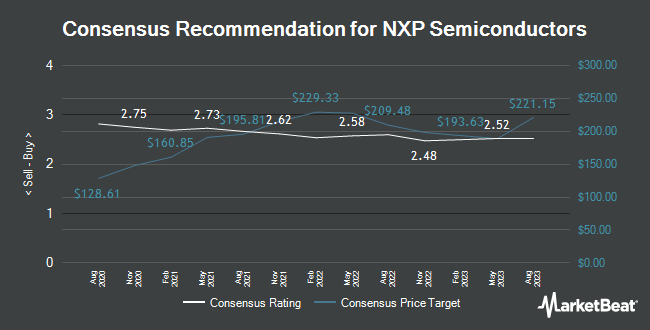