Complete the form below to receive the latest headlines and analysts' recommendations for Ally Financial with our free daily email newsletter:

Ally Financial Inc. (NYSE:ALLY) announced a quarterly dividend on Wednesday, January 13th, Wall Street Journal reports. Stockholders of record on Monday, February 1st will be paid a dividend of 0.19 per share by the financial services provider on Friday, February 12th. This represents a $0.76 annualized dividend and a dividend yield of 1.92%. The ex-dividend date of this dividend is Friday, January 29th.

Ally Financial has raised its dividend payment by 90.0% over the last three years.

Ally Financial (NYSE:ALLY) last announced its quarterly earnings data on Friday, October 16th. The financial services provider reported $1.25 earnings per share for the quarter, beating analysts’ consensus estimates of $0.72 by $0.53. The firm had revenue of $1.68 billion during the quarter, compared to analysts’ expectations of $1.57 billion. Ally Financial had a net margin of 12.22% and a return on equity of 6.43%. The business’s quarterly revenue was up 3.7% compared to the same quarter last year. During the same quarter in the previous year, the business posted $1.01 earnings per share. As a group, sell-side analysts predict that Ally Financial will post 2.44 EPS for the current year.

Featured Story: What is a dividend reinvestment plan? 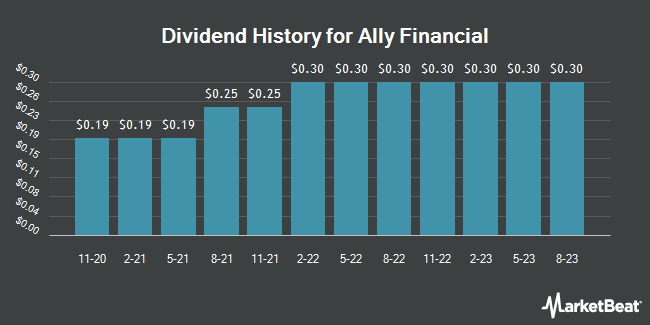 AdvanSix Inc. Given Consensus Rating of “Buy” by Brokerages