Shares of CarParts.com, Inc. (NASDAQ:PRTS) have received an average rating of “Buy” from the nine research firms that are currently covering the company, MarketBeat.com reports. Three research analysts have rated the stock with a hold recommendation and six have given a buy recommendation to the company. The average 1-year price target among brokers that have issued a report on the stock in the last year is $17.20.

CarParts.com (NASDAQ:PRTS) last released its quarterly earnings data on Monday, November 9th. The specialty retailer reported $0.03 earnings per share for the quarter. The company had revenue of $117.41 million for the quarter, compared to analysts’ expectations of $88.53 million. CarParts.com had a negative net margin of 7.65% and a negative return on equity of 123.97%. On average, equities research analysts predict that CarParts.com will post -0.02 EPS for the current year.

CarParts.com, Inc, together with its subsidiaries, operates as an online provider of aftermarket auto parts and accessories primarily in the United States and the Philippines. It offers collision parts, such as parts for the exterior of an automobile; mirror products; engine parts comprising engine and chassis components, as well as other mechanical and electrical parts; and performance parts and accessories to individual consumers through its network of e-commerce Websites and online marketplaces. 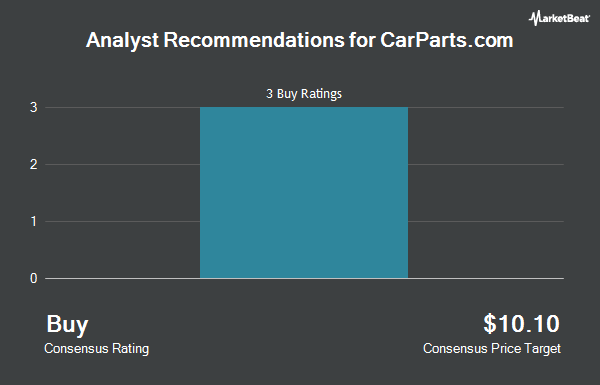