General Dynamics Co. (NYSE:GD) announced a quarterly dividend on Wednesday, December 2nd, RTT News reports. Shareholders of record on Friday, January 15th will be given a dividend of 1.10 per share by the aerospace company on Friday, February 5th. This represents a $4.40 dividend on an annualized basis and a yield of 2.87%. The ex-dividend date is Thursday, January 14th.

General Dynamics (NYSE:GD) last announced its quarterly earnings results on Wednesday, October 28th. The aerospace company reported $2.90 earnings per share (EPS) for the quarter, beating the Thomson Reuters’ consensus estimate of $2.85 by $0.05. General Dynamics had a net margin of 8.33% and a return on equity of 23.00%. The firm had revenue of $9.43 billion during the quarter, compared to analysts’ expectations of $9.60 billion. Equities analysts expect that General Dynamics will post 11.06 EPS for the current year.

In other General Dynamics news, VP William A. Moss sold 4,713 shares of the company’s stock in a transaction that occurred on Tuesday, November 3rd. The stock was sold at an average price of $138.54, for a total transaction of $652,939.02. Following the sale, the vice president now directly owns 12,753 shares in the company, valued at $1,766,800.62. The sale was disclosed in a document filed with the SEC, which is available at the SEC website. Corporate insiders own 6.60% of the company’s stock.

General Dynamics Corp. is an aerospace and defense company, which engages in the provision of tanks, rockets, missiles, submarines, warships, fighters and electronics to all of the military services. It operates through the following segments: Aerospace, Combat Systems, Information Technology, Mission Systems and Marine Systems. 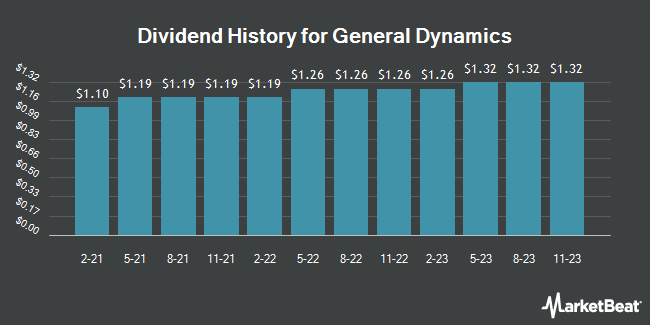