Complete the form below to receive the latest headlines and analysts' recommendations for Medtronic with our free daily email newsletter:

Medtronic (NYSE:MDT) announced its quarterly earnings results on Tuesday. The medical technology company reported $1.29 earnings per share (EPS) for the quarter, topping the Zacks’ consensus estimate of $1.15 by $0.14, RTT News reports. The company had revenue of $7.78 billion during the quarter, compared to the consensus estimate of $7.77 billion. Medtronic had a return on equity of 9.71% and a net margin of 12.69%. Medtronic’s revenue for the quarter was up .8% on a year-over-year basis. During the same period in the previous year, the business earned $1.44 EPS.

Featured Article: How to Use the MarketBeat Retirement Calculator 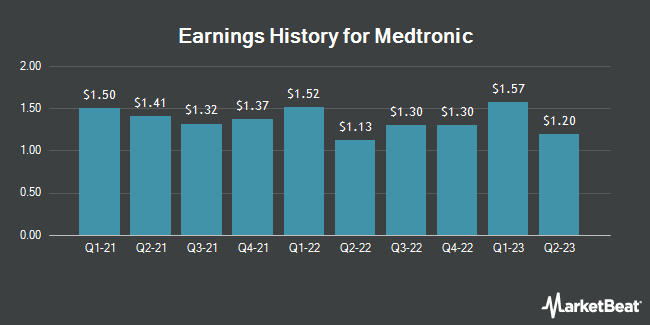 $92.33 Million in Sales Expected for Merchants Bancorp This Quarter

GreenPower Price Down 2.3% This Week

$46.80 Million in Sales Expected for CNB Financial Co. This Quarter