Complete the form below to receive the latest headlines and analysts' recommendations for Brigham Minerals with our free daily email newsletter:

Canada Pension Plan Investment Board acquired a new position in Brigham Minerals, Inc. (NYSE:MNRL) in the 4th quarter, according to the company in its most recent 13F filing with the SEC. The fund acquired 143,700 shares of the company’s stock, valued at approximately $1,579,000. Canada Pension Plan Investment Board owned about 0.25% of Brigham Minerals at the end of the most recent reporting period.

Brigham Minerals (NYSE:MNRL) last released its quarterly earnings results on Thursday, February 25th. The company reported ($0.87) earnings per share for the quarter, missing the Thomson Reuters’ consensus estimate of $0.06 by ($0.93). The company had revenue of $23.76 million during the quarter, compared to the consensus estimate of $25.15 million. Brigham Minerals had a negative net margin of 3.67% and a positive return on equity of 1.70%. Sell-side analysts predict that Brigham Minerals, Inc. will post 0.14 EPS for the current fiscal year.

The business also recently declared a quarterly dividend, which was paid on Friday, March 26th. Shareholders of record on Friday, March 19th were issued a $0.26 dividend. This is a boost from Brigham Minerals’s previous quarterly dividend of $0.24. This represents a $1.04 annualized dividend and a yield of 6.68%. The ex-dividend date of this dividend was Thursday, March 18th. Brigham Minerals’s dividend payout ratio is currently 182.46%.

Brigham Minerals, Inc owns and operates a portfolio of mineral and royalty interests in the continental United States. The company primarily holds mineral and royalty interests in the Permian Basin in West Texas and New Mexico; the South Central Oklahoma Oil Province and Sooner Trend Anadarko Basin Canadian and Kingfisher Counties plays in the Anadarko Basin of Oklahoma; the Denver-Julesburg Basin in Colorado; and Wyoming and the Williston Basin in North Dakota. 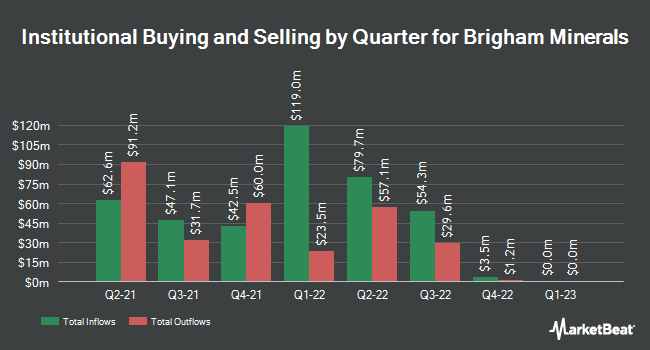