Complete the form below to receive the latest headlines and analysts' recommendations for Franco-Nevada with our free daily email newsletter:

Shares of Franco-Nevada Co. (NYSE:FNV) (TSE:FNV) have been assigned an average rating of “Hold” from the fourteen ratings firms that are covering the firm, Marketbeat.com reports. One equities research analyst has rated the stock with a sell rating, six have given a hold rating and six have given a buy rating to the company. The average 12-month price target among brokerages that have issued a report on the stock in the last year is $156.83.

Franco-Nevada (NYSE:FNV) (TSE:FNV) last issued its earnings results on Tuesday, March 9th. The basic materials company reported $0.85 earnings per share (EPS) for the quarter, topping the Zacks’ consensus estimate of $0.69 by $0.16. Franco-Nevada had a return on equity of 9.17% and a net margin of 26.99%. The firm had revenue of $304.50 million for the quarter, compared to analysts’ expectations of $265.88 million. During the same quarter last year, the business earned $0.59 earnings per share. The company’s revenue was up 18.0% compared to the same quarter last year. Research analysts predict that Franco-Nevada will post 2.52 earnings per share for the current fiscal year.

The company also recently declared a quarterly dividend, which was paid on Thursday, March 25th. Investors of record on Thursday, March 11th were paid a $0.26 dividend. The ex-dividend date was Wednesday, March 10th. This represents a $1.04 annualized dividend and a yield of 0.79%. Franco-Nevada’s dividend payout ratio (DPR) is presently 57.14%.

Franco-Nevada Corporation operates as a gold-focused royalty and stream company in the United States, Canada, Latin America, Australia, Europe, and Africa, and internationally. It operates through two segment, Mining and Energy. The company manages its portfolio with a focus on precious metals, such as gold, silver, and platinum group metals; and energy comprising oil, gas, and natural gas liquids.

Read More: What are some reasons analysts would give stocks a buy rating? 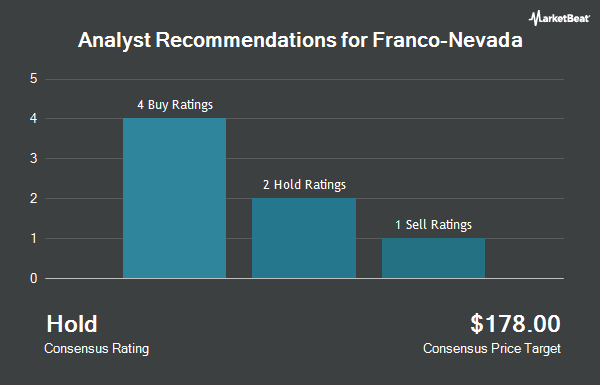