Complete the form below to receive the latest headlines and analysts' recommendations for 89bio with our free daily email newsletter:

Northern Trust Corp increased its position in shares of 89bio, Inc. (NASDAQ:ETNB) by 23.4% during the fourth quarter, HoldingsChannel.com reports. The firm owned 139,885 shares of the company’s stock after buying an additional 26,486 shares during the period. Northern Trust Corp’s holdings in 89bio were worth $3,409,000 as of its most recent filing with the Securities and Exchange Commission.

In related news, insider Ram Waisbourd sold 7,000 shares of the company’s stock in a transaction dated Tuesday, March 16th. The shares were sold at an average price of $24.20, for a total transaction of $169,400.00. Following the completion of the sale, the insider now owns 7,000 shares of the company’s stock, valued at $169,400. The transaction was disclosed in a document filed with the Securities & Exchange Commission, which is available at the SEC website. 18.10% of the stock is owned by insiders.

Several equities analysts have recently issued reports on ETNB shares. Chardan Capital upped their price target on 89bio from $92.00 to $95.00 and gave the company a “buy” rating in a research note on Thursday, March 25th. They noted that the move was a valuation call. Oppenheimer restated a “buy” rating and set a $60.00 target price on shares of 89bio in a research report on Thursday, March 18th. SVB Leerink increased their target price on shares of 89bio from $56.00 to $62.00 and gave the stock an “outperform” rating in a report on Monday, March 29th. Finally, Zacks Investment Research upgraded 89bio from a “sell” rating to a “hold” rating in a research report on Tuesday, March 9th. One research analyst has rated the stock with a hold rating, six have given a buy rating and one has assigned a strong buy rating to the stock. The stock presently has an average rating of “Buy” and a consensus price target of $58.13.

89bio, Inc, a clinical-stage biopharmaceutical company, focuses on the development and commercialization of therapies for the treatment of liver and cardio-metabolic diseases. Its lead product candidate is BIO89-100, a glycoPEGylated analog of fibroblast growth factor 21 for the treatment of nonalcoholic steatohepatitis.

Want to see what other hedge funds are holding ETNB? Visit HoldingsChannel.com to get the latest 13F filings and insider trades for 89bio, Inc. (NASDAQ:ETNB). 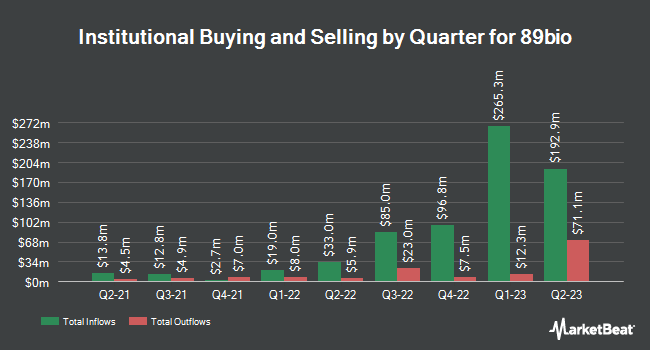 Receive News & Ratings for 89bio Daily - Enter your email address below to receive a concise daily summary of the latest news and analysts' ratings for 89bio and related companies with MarketBeat.com's FREE daily email newsletter.

QANplatform Price Up 42.8% Over Last Week

Freicoin Price Up 10% Over Last 7 Days