Complete the form below to receive the latest headlines and analysts' recommendations for Alarm.com with our free daily email newsletter:

A number of analysts recently issued reports on the stock. JPMorgan Chase & Co. began coverage on shares of Alarm.com in a report on Tuesday, April 13th. They set a “neutral” rating and a $100.00 price target on the stock. Imperial Capital raised shares of Alarm.com from an “in-line” rating to an “outperform” rating and set a $105.00 target price on the stock in a research note on Tuesday, April 13th. Raymond James lifted their price target on Alarm.com from $75.00 to $115.00 and gave the company a “strong-buy” rating in a research note on Thursday, March 4th. Roth Capital increased their price target on Alarm.com from $75.00 to $110.00 and gave the stock a “buy” rating in a research report on Thursday, January 21st. Finally, Maxim Group raised their price objective on Alarm.com from $79.00 to $120.00 in a report on Friday, February 26th. Four equities research analysts have rated the stock with a hold rating, five have issued a buy rating and one has given a strong buy rating to the company’s stock. The stock has a consensus rating of “Buy” and an average price target of $94.61.

Read More: What does a market perform rating mean? 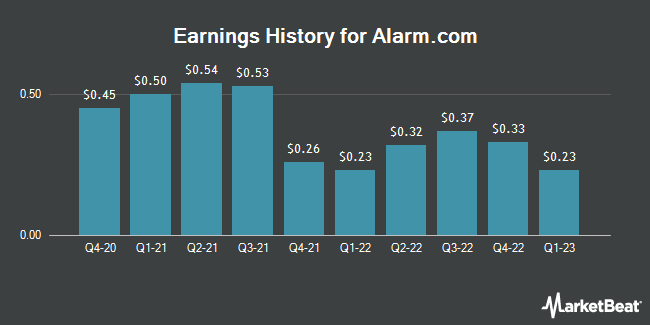