Complete the form below to receive the latest headlines and analysts' recommendations for Outfront Media with our free daily email newsletter:

Outfront Media (NYSE:OUT) posted its quarterly earnings results on Tuesday. The financial services provider reported ($0.52) EPS for the quarter, missing the Zacks’ consensus estimate of ($0.46) by ($0.06), MarketWatch Earnings reports. Outfront Media had a negative return on equity of 1.94% and a negative net margin of 1.46%. The business had revenue of $259.20 million during the quarter, compared to analysts’ expectations of $272.23 million. During the same period in the prior year, the firm posted $0.04 earnings per share. The firm’s revenue for the quarter was down 32.7% on a year-over-year basis.

OUTFRONT leverages the power of technology, location and creativity to connect brands with consumers outside of their homes through one of the largest and most diverse sets of billboard, transit, and mobile assets in North America. Through its technology platform, OUTFRONT will fundamentally change the ways advertisers engage audiences on-the-go. 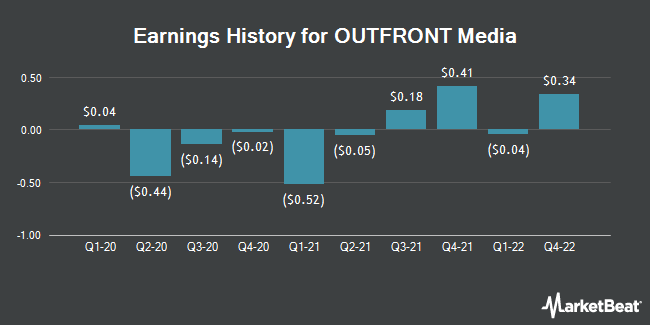