Fresh Del Monte Produce Inc. (NYSE:FDP) Director Charles Jr. Beard purchased 700 shares of the firm’s stock in a transaction that occurred on Tuesday, June 8th. The shares were bought at an average cost of $34.97 per share, with a total value of $24,479.00. Following the completion of the acquisition, the director now owns 5,522 shares of the company’s stock, valued at $193,104.34. The acquisition was disclosed in a document filed with the Securities & Exchange Commission, which is available through this link.

Fresh Del Monte Produce (NYSE:FDP) last issued its quarterly earnings results on Wednesday, May 5th. The company reported $0.88 earnings per share for the quarter, topping the Thomson Reuters’ consensus estimate of $0.36 by $0.52. Fresh Del Monte Produce had a return on equity of 4.56% and a net margin of 1.89%. The firm had revenue of $1.09 billion during the quarter, compared to the consensus estimate of $1.11 billion. During the same period last year, the company earned $0.34 earnings per share. The company’s revenue for the quarter was down 2.7% on a year-over-year basis.

The firm also recently announced a quarterly dividend, which will be paid on Friday, June 11th. Shareholders of record on Wednesday, May 19th will be issued a $0.10 dividend. This represents a $0.40 dividend on an annualized basis and a yield of 1.15%. The ex-dividend date of this dividend is Tuesday, May 18th.

Separately, TheStreet raised Fresh Del Monte Produce from a “c” rating to a “b” rating in a report on Wednesday, May 5th. 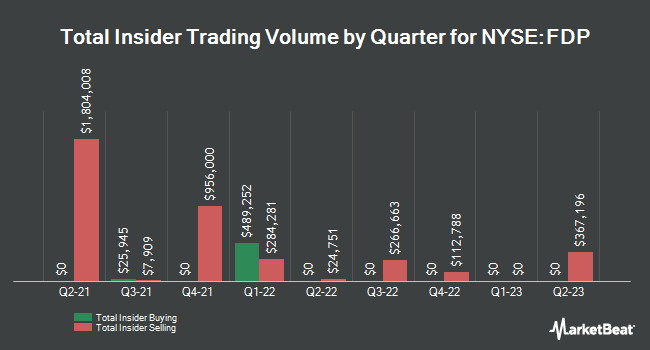 Complete the form below to receive the latest headlines and analysts' recommendations for Fresh Del Monte Produce with our free daily email newsletter: