Wall Street brokerages expect Aspen Technology, Inc. (NASDAQ:AZPN) to post sales of $206.15 million for the current fiscal quarter, according to Zacks. Three analysts have made estimates for Aspen Technology’s earnings. The lowest sales estimate is $204.32 million and the highest is $209.22 million. Aspen Technology posted sales of $199.33 million in the same quarter last year, which would indicate a positive year over year growth rate of 3.4%. The firm is expected to report its next earnings results on Wednesday, August 11th.

On average, analysts expect that Aspen Technology will report full year sales of $717.56 million for the current financial year, with estimates ranging from $715.74 million to $720.64 million. For the next financial year, analysts forecast that the firm will report sales of $700.52 million, with estimates ranging from $681.70 million to $713.75 million. Zacks Investment Research’s sales calculations are a mean average based on a survey of analysts that cover Aspen Technology.

Aspen Technology (NASDAQ:AZPN) last announced its quarterly earnings data on Tuesday, April 27th. The technology company reported $1.05 earnings per share (EPS) for the quarter, missing analysts’ consensus estimates of $1.11 by ($0.06). The company had revenue of $162.80 million for the quarter, compared to the consensus estimate of $178.37 million. Aspen Technology had a return on equity of 55.65% and a net margin of 45.30%. The company’s revenue for the quarter was up 23.3% on a year-over-year basis. During the same quarter in the prior year, the company earned $0.74 EPS.

Several analysts have recently issued reports on the company. KeyCorp increased their target price on Aspen Technology from $158.00 to $180.00 and gave the stock an “overweight” rating in a report on Tuesday, February 16th. Robert W. Baird reiterated a “buy” rating on shares of Aspen Technology in a research report on Tuesday, May 18th. One equities research analyst has rated the stock with a sell rating, two have issued a hold rating and three have issued a buy rating to the company. The stock has an average rating of “Hold” and a consensus price target of $148.83.

Aspen Technology, Inc, together with its subsidiaries, provides asset optimization solutions in North America, Europe, the Asia Pacific, Latin America, and the Middle East. The company operates in two segments, Subscription and Software, and Services and Other. It offers asset optimization software that optimizes asset design, operations, and maintenance in various industrial environments. 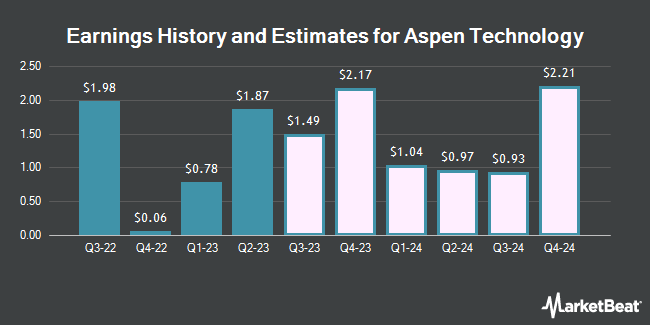 Alpha Coin Trading Down 11.2% This Week

Complete the form below to receive the latest headlines and analysts' recommendations for Aspen Technology with our free daily email newsletter: