Alector, Inc. (NASDAQ:ALEC) insider Robert Paul sold 19,175 shares of the company’s stock in a transaction that occurred on Tuesday, June 8th. The shares were sold at an average price of $19.18, for a total value of $367,776.50. Following the transaction, the insider now owns 281,011 shares of the company’s stock, valued at approximately $5,389,790.98. The sale was disclosed in a filing with the Securities & Exchange Commission, which can be accessed through this link.

Alector (NASDAQ:ALEC) last released its quarterly earnings results on Tuesday, May 4th. The company reported ($0.66) earnings per share for the quarter, beating the consensus estimate of ($0.69) by $0.03. Alector had a negative return on equity of 69.73% and a negative net margin of 1,122.03%. Equities analysts forecast that Alector, Inc. will post -2.82 EPS for the current fiscal year.

ALEC has been the topic of a number of research analyst reports. Zacks Investment Research downgraded Alector from a “hold” rating to a “sell” rating in a report on Wednesday, April 28th. Morgan Stanley increased their target price on Alector from $31.00 to $33.00 and gave the company an “overweight” rating in a report on Monday, April 19th. One research analyst has rated the stock with a sell rating and four have issued a buy rating to the company’s stock. The company currently has an average rating of “Buy” and an average target price of $34.40. 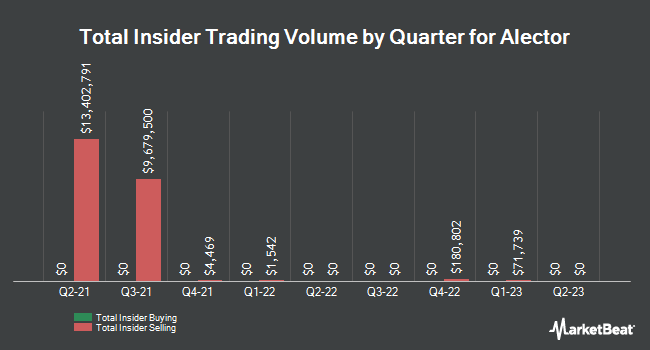