Freeport-McMoRan (NYSE:FCX) posted its quarterly earnings results on Thursday. The natural resource company reported $0.77 earnings per share for the quarter, topping the Zacks’ consensus estimate of $0.75 by $0.02, RTT News reports. Freeport-McMoRan had a return on equity of 9.85% and a net margin of 11.13%. The company had revenue of $5.75 billion during the quarter, compared to the consensus estimate of $5.83 billion. During the same period last year, the business earned $0.03 EPS. The business’s quarterly revenue was up 88.2% on a year-over-year basis.

The business also recently declared a quarterly dividend, which will be paid on Monday, August 2nd. Shareholders of record on Thursday, July 15th will be paid a dividend of $0.075 per share. The ex-dividend date of this dividend is Wednesday, July 14th. This represents a $0.30 dividend on an annualized basis and a yield of 0.87%. Freeport-McMoRan’s dividend payout ratio (DPR) is currently 55.56%.

Freeport-McMoRan Inc engages in the mining of mineral properties in North America, South America, and Indonesia. The company primarily explores for copper, gold, molybdenum, silver, and other metals, as well as oil and gas. Its assets include the Grasberg minerals district in Indonesia; Morenci, Bagdad, Safford, Sierrita, and Miami in Arizona; Tyrone and Chino in New Mexico; and Henderson and Climax in Colorado, North America, as well as Cerro Verde in Peru and El Abra in Chile.

Read More: Profit margin is different from the revenue 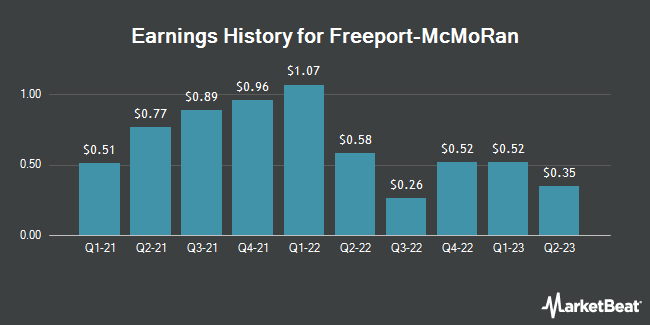 Kion Group Given a €72.00 Price Target by The Goldman Sachs Group Analysts

Complete the form below to receive the latest headlines and analysts' recommendations for Freeport-McMoRan with our free daily email newsletter: