Wakefield Asset Management LLLP acquired a new stake in shares of MaxLinear, Inc. (NYSE:MXL) during the 2nd quarter, according to its most recent filing with the SEC. The institutional investor acquired 23,815 shares of the semiconductor company’s stock, valued at approximately $1,012,000.

MaxLinear (NYSE:MXL) last posted its quarterly earnings data on Wednesday, July 28th. The semiconductor company reported $0.53 earnings per share for the quarter, beating the Zacks’ consensus estimate of $0.33 by $0.20. MaxLinear had a positive return on equity of 18.89% and a negative net margin of 7.41%. The company had revenue of $205.38 million during the quarter, compared to analyst estimates of $205.13 million. On average, sell-side analysts forecast that MaxLinear, Inc. will post 1.68 EPS for the current year.

In related news, VP Brendan Walsh sold 10,000 shares of MaxLinear stock in a transaction on Thursday, September 2nd. The stock was sold at an average price of $53.50, for a total value of $535,000.00. Following the completion of the sale, the vice president now owns 146,932 shares of the company’s stock, valued at $7,860,862. The sale was disclosed in a filing with the Securities & Exchange Commission, which is accessible through this hyperlink. Also, insider Steven G. Litchfield acquired 2,320 shares of the business’s stock in a transaction that occurred on Friday, September 10th. The stock was purchased at an average cost of $53.85 per share, with a total value of $124,932.00. Following the acquisition, the insider now directly owns 112,009 shares of the company’s stock, valued at $6,031,684.65. The disclosure for this purchase can be found here. In the last three months, insiders acquired 6,904 shares of company stock valued at $374,709 and sold 207,637 shares valued at $9,860,801. 8.82% of the stock is currently owned by company insiders.

Want to see what other hedge funds are holding MXL? Visit HoldingsChannel.com to get the latest 13F filings and insider trades for MaxLinear, Inc. (NYSE:MXL). 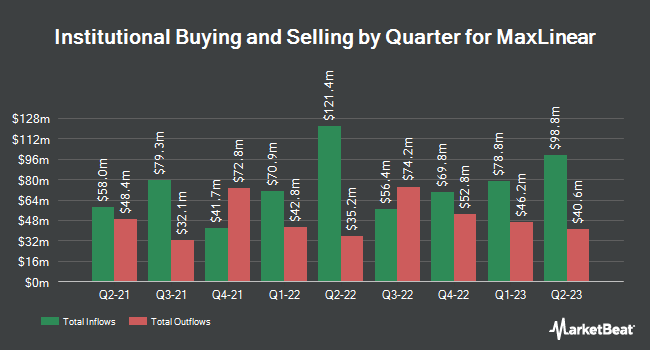 Complete the form below to receive the latest headlines and analysts' recommendations for MaxLinear with our free daily email newsletter: