Jabil (NYSE:JBL) posted its quarterly earnings data on Tuesday. The technology company reported $1.44 earnings per share (EPS) for the quarter, topping the Thomson Reuters’ consensus estimate of $1.38 by $0.06, MarketWatch Earnings reports. The business had revenue of $7.40 billion during the quarter, compared to the consensus estimate of $7.67 billion. Jabil had a net margin of 2.02% and a return on equity of 29.25%. Jabil’s quarterly revenue was up 1.4% compared to the same quarter last year. During the same period in the prior year, the firm earned $0.44 EPS.

The business also recently disclosed a quarterly dividend, which was paid on Thursday, September 2nd. Shareholders of record on Friday, August 13th were given a $0.08 dividend. This represents a $0.32 annualized dividend and a yield of 0.55%. The ex-dividend date was Thursday, August 12th. Jabil’s payout ratio is presently 91.43%.

A hedge fund recently raised its stake in Jabil stock. Morgan Stanley increased its position in shares of Jabil Inc. (NYSE:JBL) by 17.9% during the second quarter, according to the company in its most recent disclosure with the Securities and Exchange Commission. The fund owned 711,983 shares of the technology company’s stock after buying an additional 108,120 shares during the period. Morgan Stanley owned 0.49% of Jabil worth $41,381,000 as of its most recent filing with the Securities and Exchange Commission. Institutional investors and hedge funds own 88.93% of the company’s stock.

Recommended Story: What are economic reports? 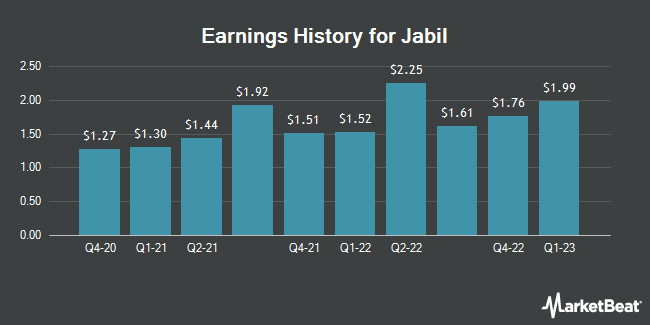 Receive News & Ratings for Jabil Daily - Enter your email address below to receive a concise daily summary of the latest news and analysts' ratings for Jabil and related companies with MarketBeat.com's FREE daily email newsletter.

Complete the form below to receive the latest headlines and analysts' recommendations for Jabil with our free daily email newsletter: