Herman Miller (NASDAQ:MLHR) posted its earnings results on Tuesday. The business services provider reported $0.49 EPS for the quarter, missing the consensus estimate of $0.50 by ($0.01), MarketWatch Earnings reports. Herman Miller had a net margin of 7.03% and a return on equity of 24.38%. The business had revenue of $789.70 million during the quarter, compared to analyst estimates of $648.20 million. During the same quarter in the prior year, the business earned $1.24 earnings per share. The firm’s revenue was up 26.0% compared to the same quarter last year.

The company also recently declared a quarterly dividend, which will be paid on Friday, October 15th. Shareholders of record on Saturday, August 28th will be paid a dividend of $0.1875 per share. This represents a $0.75 dividend on an annualized basis and a yield of 1.99%. The ex-dividend date of this dividend is Thursday, August 26th. Herman Miller’s payout ratio is currently 22.52%.

Separately, Benchmark lowered their target price on Herman Miller from $61.00 to $55.00 and set a “buy” rating on the stock in a research report on Monday.

Herman Miller, Inc engages in the research, design, manufacture, and distribution of interior furnishings for use in various environments including office, healthcare, educational, and residential settings. It operates through the following segments: North America Contract, International Contract, Retail, and Corporate.

Further Reading: What is the quiet period? 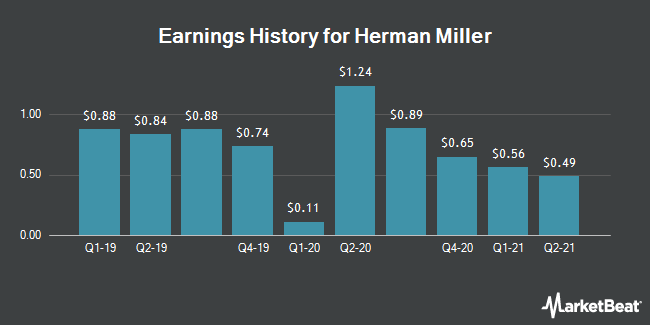 Complete the form below to receive the latest headlines and analysts' recommendations for Herman Miller with our free daily email newsletter: