Gerdau (NYSE:GGB) released its quarterly earnings data on Sunday. The basic materials company reported $1.96 earnings per share for the quarter, missing analysts’ consensus estimates of $2.27 by ($0.31), Fidelity Earnings reports. Gerdau had a net margin of 19.01% and a return on equity of 35.05%.

The company also recently declared a Variable dividend, which will be paid on Tuesday, November 23rd. Investors of record on Thursday, September 30th will be given a dividend of $0.0814 per share. This is a positive change from Gerdau’s previous Variable dividend of $0.01. This represents a dividend yield of 7.2%. The ex-dividend date of this dividend is Wednesday, September 29th. Gerdau’s dividend payout ratio (DPR) is presently 111.11%.

An institutional investor recently raised its position in Gerdau stock. Wells Fargo & Company MN lifted its position in shares of Gerdau S.A. (NYSE:GGB) by 46.1% during the second quarter, according to its most recent disclosure with the Securities and Exchange Commission (SEC). The institutional investor owned 46,006 shares of the basic materials company’s stock after purchasing an additional 14,514 shares during the period. Wells Fargo & Company MN’s holdings in Gerdau were worth $272,000 at the end of the most recent quarter. Hedge funds and other institutional investors own 2.69% of the company’s stock. 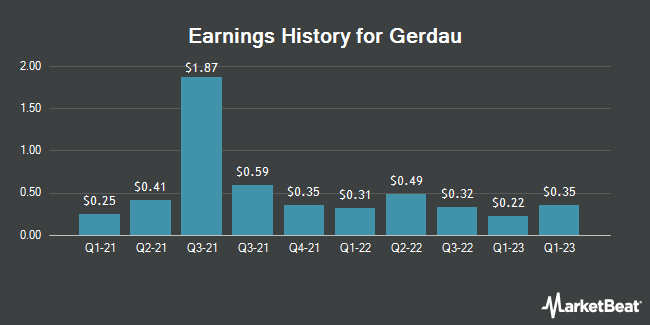 Receive News & Ratings for Gerdau Daily - Enter your email address below to receive a concise daily summary of the latest news and analysts' ratings for Gerdau and related companies with MarketBeat.com's FREE daily email newsletter.

VIDY Price Down 0.4% This Week

$1.04 EPS Expected for The Carlyle Group Inc. This Quarter

Complete the form below to receive the latest headlines and analysts' recommendations for Gerdau with our free daily email newsletter: