Analysts expect Omeros Co. (NASDAQ:OMER) to report sales of $29.31 million for the current quarter, Zacks Investment Research reports. Two analysts have issued estimates for Omeros’ earnings, with estimates ranging from $29.11 million to $29.50 million. Omeros reported sales of $26.11 million in the same quarter last year, which indicates a positive year over year growth rate of 12.3%. The company is expected to report its next earnings report on Monday, November 8th.

According to Zacks, analysts expect that Omeros will report full-year sales of $110.46 million for the current year, with estimates ranging from $109.71 million to $111.20 million. For the next financial year, analysts expect that the firm will report sales of $122.87 million, with estimates ranging from $121.50 million to $124.24 million. Zacks’ sales averages are a mean average based on a survey of sell-side research analysts that follow Omeros.

Omeros (NASDAQ:OMER) last posted its quarterly earnings data on Sunday, August 8th. The biopharmaceutical company reported ($0.46) EPS for the quarter, topping the consensus estimate of ($0.50) by $0.04. The firm had revenue of $28.82 million for the quarter, compared to analysts’ expectations of $25.95 million.

Omeros Corp. operates as a biopharmaceutical company. The firm engages in the discovery, development, and commercializing of both small-molecule and protein therapeutics for large market. It also offers orphan indications targeting inflammation, coagulopathies, and disorders of the central nervous system.

See Also: What is a Fiduciary? 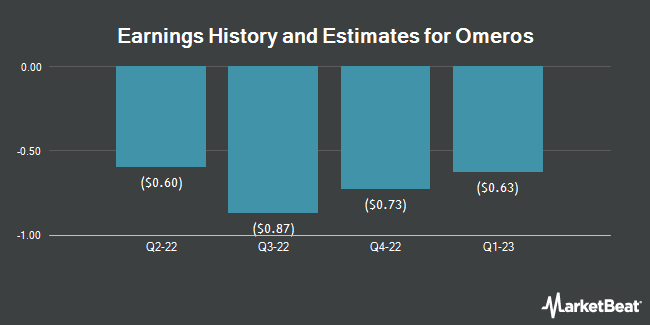 Receive News & Ratings for Omeros Daily - Enter your email address below to receive a concise daily summary of the latest news and analysts' ratings for Omeros and related companies with MarketBeat.com's FREE daily email newsletter.

$208.42 Million in Sales Expected for Precision Drilling Co. This Quarter

Complete the form below to receive the latest headlines and analysts' recommendations for Omeros with our free daily email newsletter: