Toronto Dominion Bank grew its holdings in Brookfield Infrastructure Co. (NASDAQ:BIPC) by 101.2% during the second quarter, according to the company in its most recent filing with the Securities and Exchange Commission. The firm owned 47,259 shares of the company’s stock after acquiring an additional 23,768 shares during the period. Toronto Dominion Bank owned about 0.11% of Brookfield Infrastructure worth $3,563,000 as of its most recent SEC filing.

Separately, Wells Fargo & Company dropped their price target on shares of Brookfield Infrastructure from $73.00 to $70.00 and set an “overweight” rating on the stock in a research note on Wednesday.

The company also recently declared a quarterly dividend, which was paid on Wednesday, September 29th. Investors of record on Tuesday, August 31st were paid a dividend of $0.51 per share. This represents a $2.04 annualized dividend and a yield of 3.46%. The ex-dividend date of this dividend was Monday, August 30th. Brookfield Infrastructure’s dividend payout ratio (DPR) is 141.67%.

Brookfield Infrastructure Corporation, together with its subsidiaries, owns and operates regulated natural gas transmission systems in Brazil. The company also engages in the regulated gas and electricity distribution operations in the United Kingdom. It operates approximately 2,000 kilometers of natural gas transportation pipelines in the states of Rio de Janeiro, Sao Paulo, and Minas Gerais; and 3.6 million gas and electricity connections and 1.5 million installed smart meters in the United Kingdom.

Read More: What is the Beige Book?

Want to see what other hedge funds are holding BIPC? Visit HoldingsChannel.com to get the latest 13F filings and insider trades for Brookfield Infrastructure Co. (NASDAQ:BIPC). 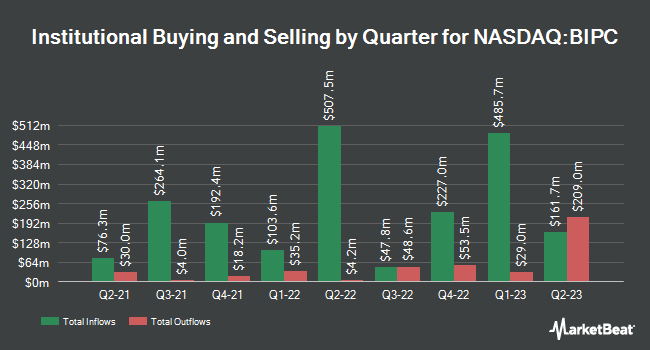 Lightning eMotors Shares Gap Up to $7.84

Complete the form below to receive the latest headlines and analysts' recommendations for Brookfield Infrastructure with our free daily email newsletter: