Price T Rowe Associates Inc. MD increased its stake in shares of The AZEK Company Inc. (NYSE:AZEK) by 14.8% in the second quarter, according to the company in its most recent filing with the Securities and Exchange Commission (SEC). The institutional investor owned 39,535 shares of the company’s stock after purchasing an additional 5,095 shares during the quarter. Price T Rowe Associates Inc. MD’s holdings in AZEK were worth $1,679,000 at the end of the most recent reporting period.

In related news, insider Joe Ochoa sold 20,000 shares of the stock in a transaction on Friday, September 17th. The shares were sold at an average price of $38.67, for a total transaction of $773,400.00. The sale was disclosed in a document filed with the SEC, which can be accessed through this link. 4.20% of the stock is owned by corporate insiders.

AZEK has been the subject of several recent analyst reports. Royal Bank of Canada increased their price objective on shares of AZEK from $52.00 to $54.00 and gave the stock an “outperform” rating in a research report on Friday, August 13th. Zacks Investment Research cut shares of AZEK from a “buy” rating to a “hold” rating in a research report on Wednesday. Three research analysts have rated the stock with a hold rating and six have given a buy rating to the company’s stock. According to MarketBeat.com, AZEK presently has an average rating of “Buy” and a consensus price target of $49.60.

AZEK (NYSE:AZEK) last issued its earnings results on Thursday, November 18th. The company reported $0.32 earnings per share (EPS) for the quarter, topping the Thomson Reuters’ consensus estimate of $0.28 by $0.04. The business had revenue of $346.10 million for the quarter, compared to analyst estimates of $329.50 million. AZEK had a net margin of 7.91% and a return on equity of 10.23%. AZEK’s revenue was up 31.1% on a year-over-year basis. During the same period in the prior year, the firm earned $0.29 earnings per share. As a group, equities analysts anticipate that The AZEK Company Inc. will post 1.12 EPS for the current year.

The AZEK Company Inc engages in designing, manufacturing, and selling building products for residential and commercial markets in the United States. The company operates through Residential and Commercial segments. Its products include decks, rails, trims, accessories, and specialty exteriors; and partitions, lockers, and polymer solutions. 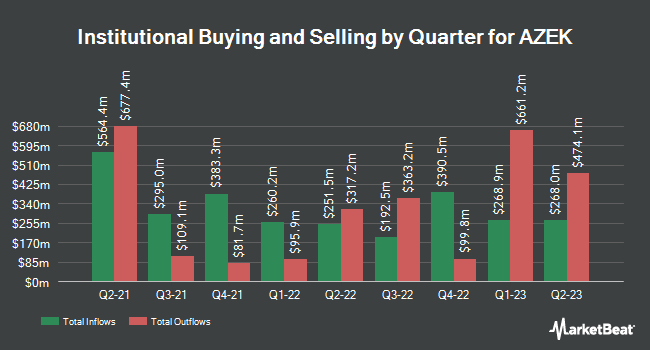 Receive News & Ratings for AZEK Daily - Enter your email address below to receive a concise daily summary of the latest news and analysts' ratings for AZEK and related companies with MarketBeat.com's FREE daily email newsletter.

Ulta Beauty Price Target Increased to $516.00 by Analysts at Barclays

Complete the form below to receive the latest headlines and analysts' recommendations for AZEK with our free daily email newsletter: