Regal Wealth Group Inc. trimmed its stake in shares of Carrier Global Co. (NYSE:CARR) by 11.4% in the 3rd quarter, according to its most recent disclosure with the Securities & Exchange Commission. The fund owned 5,854 shares of the company’s stock after selling 756 shares during the period. Regal Wealth Group Inc.’s holdings in Carrier Global were worth $303,000 as of its most recent filing with the Securities & Exchange Commission.

In other Carrier Global news, insider Jurgen Timperman sold 33,036 shares of the stock in a transaction on Friday, November 12th. The shares were sold at an average price of $56.05, for a total transaction of $1,851,667.80. The transaction was disclosed in a document filed with the Securities & Exchange Commission, which is accessible through the SEC website. 0.14% of the stock is owned by company insiders.

Carrier Global (NYSE:CARR) last released its quarterly earnings data on Thursday, October 28th. The company reported $0.71 EPS for the quarter, beating the Thomson Reuters’ consensus estimate of $0.66 by $0.05. Carrier Global had a net margin of 11.08% and a return on equity of 27.46%. The business had revenue of $5.30 billion during the quarter, compared to analyst estimates of $5.38 billion. During the same quarter last year, the business earned $0.67 earnings per share. Carrier Global’s quarterly revenue was up 6.0% compared to the same quarter last year. As a group, sell-side analysts expect that Carrier Global Co. will post 2.21 EPS for the current year.

The firm also recently disclosed a quarterly dividend, which was paid on Monday, November 22nd. Shareholders of record on Friday, October 29th were given a dividend of $0.12 per share. The ex-dividend date of this dividend was Thursday, October 28th. This represents a $0.48 annualized dividend and a yield of 0.86%. Carrier Global’s dividend payout ratio (DPR) is currently 19.12%.

Featured Story: What is a Reverse Stock Split?

Want to see what other hedge funds are holding CARR? Visit HoldingsChannel.com to get the latest 13F filings and insider trades for Carrier Global Co. (NYSE:CARR). 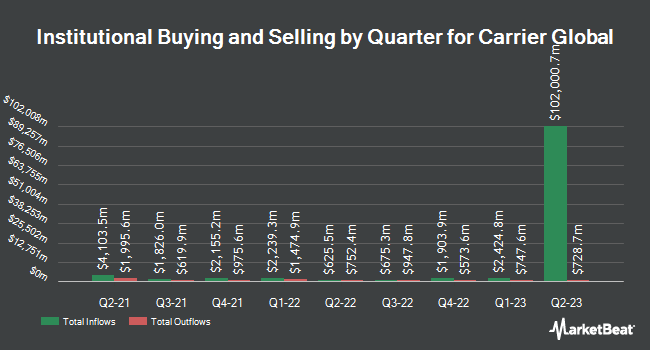 $2.36 Earnings Per Share Expected for WEX Inc. This Quarter

Complete the form below to receive the latest headlines and analysts' recommendations for Carrier Global with our free daily email newsletter: