Virtu Financial LLC reduced its stake in Tyme Technologies, Inc. (NASDAQ:TYME) by 54.1% during the second quarter, according to the company in its most recent 13F filing with the Securities & Exchange Commission. The institutional investor owned 92,625 shares of the company’s stock after selling 109,050 shares during the quarter. Virtu Financial LLC owned about 0.05% of Tyme Technologies worth $117,000 as of its most recent filing with the Securities & Exchange Commission.

In related news, Director David Carberry acquired 50,000 shares of Tyme Technologies stock in a transaction dated Wednesday, September 22nd. The stock was purchased at an average cost of $1.03 per share, for a total transaction of $51,500.00. The purchase was disclosed in a filing with the SEC, which is available through this link. Also, insider Steve Hoffman sold 78,125 shares of the company’s stock in a transaction on Tuesday, October 26th. The stock was sold at an average price of $0.97, for a total transaction of $75,781.25. The disclosure for this sale can be found here. Over the last quarter, insiders have sold 474,375 shares of company stock valued at $470,181. Company insiders own 16.90% of the company’s stock.

Tyme Technologies, Inc operates as a biotechnology company, which engages in the development and commercialization of cancer therapies. It offers a clinical program named SM-88 which is a novel, oral, and monotherapy investigational agent that aims to disrupt the cancer cell’s protein synthesis. The company was founded by Steve Hoffman and Michael Demurjian on November 22, 2011 and is headquartered in Bedminster, NJ. 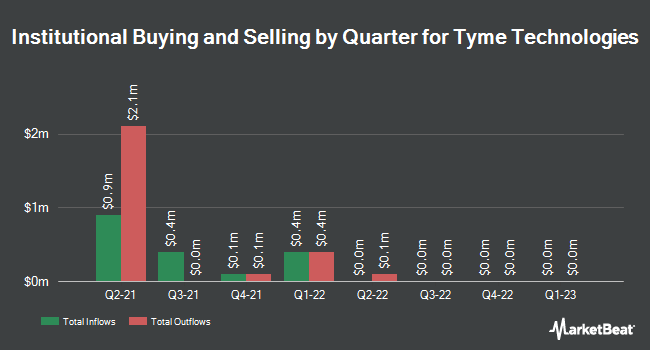 Complete the form below to receive the latest headlines and analysts' recommendations for Tyme Technologies with our free daily email newsletter: