VMware (NYSE:VMW) last issued its quarterly earnings data on Monday, November 22nd. The virtualization software provider reported $1.72 earnings per share (EPS) for the quarter, topping analysts’ consensus estimates of $1.54 by $0.18. VMware had a return on equity of 23.49% and a net margin of 16.77%. The company had revenue of $3.19 billion during the quarter, compared to analysts’ expectations of $3.12 billion. During the same quarter in the previous year, the company posted $1.05 earnings per share. The business’s revenue was up 11.3% on a year-over-year basis. On average, analysts anticipate that VMware will post 4.6 earnings per share for the current year.

The business also recently disclosed a dividend, which was paid on Monday, November 1st. Investors of record on Friday, October 29th were issued a $27.40 dividend. This is an increase from VMware’s previous dividend of $26.81. The ex-dividend date of this dividend was Tuesday, November 2nd.

A hedge fund recently raised its stake in VMware stock. Morgan Stanley raised its position in VMware, Inc. (NYSE:VMW) by 38.4% in the 2nd quarter, according to the company in its most recent 13F filing with the SEC. The fund owned 482,318 shares of the virtualization software provider’s stock after buying an additional 133,792 shares during the period. Morgan Stanley owned 0.12% of VMware worth $77,157,000 as of its most recent filing with the SEC. 16.99% of the stock is owned by institutional investors and hedge funds. 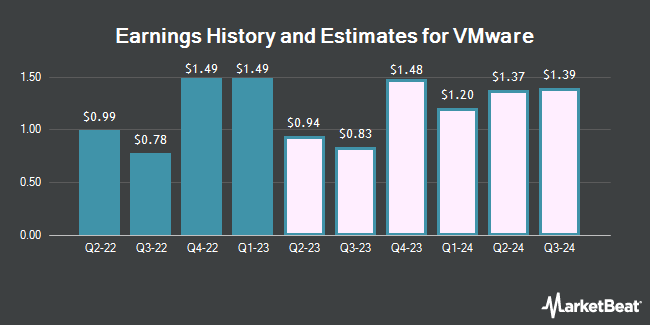 Receive News & Ratings for VMware Daily - Enter your email address below to receive a concise daily summary of the latest news and analysts' ratings for VMware and related companies with MarketBeat.com's FREE daily email newsletter.

Autohome Inc. Given Average Rating of “Hold” by Analysts

Complete the form below to receive the latest headlines and analysts' recommendations for VMware with our free daily email newsletter: