Brokerages expect Arbutus Biopharma Co. (NASDAQ:ABUS) to report sales of $3.39 million for the current quarter, according to Zacks Investment Research. Two analysts have provided estimates for Arbutus Biopharma’s earnings. The highest sales estimate is $3.47 million and the lowest is $3.30 million. Arbutus Biopharma posted sales of $2.39 million during the same quarter last year, which suggests a positive year over year growth rate of 41.8%. The company is scheduled to report its next quarterly earnings results on Thursday, March 3rd.

On average, analysts expect that Arbutus Biopharma will report full-year sales of $10.82 million for the current fiscal year, with estimates ranging from $10.10 million to $11.26 million. For the next fiscal year, analysts anticipate that the firm will post sales of $14.08 million, with estimates ranging from $13.40 million to $15.34 million. Zacks Investment Research’s sales averages are a mean average based on a survey of sell-side research analysts that follow Arbutus Biopharma.

Arbutus Biopharma (NASDAQ:ABUS) last released its earnings results on Thursday, November 4th. The biopharmaceutical company reported ($0.24) earnings per share for the quarter, meeting the consensus estimate of ($0.24). The firm had revenue of $3.34 million during the quarter, compared to analyst estimates of $2.36 million. During the same period in the prior year, the firm earned ($0.27) earnings per share.

Arbutus Biopharma Corp. is a biopharmaceutical company. It engages in discovering, developing and commercializing a cure for patients suffering from chronic Hepatitis B virus infection. The company was founded in 2007 and is headquartered in Warminster, PA.

Featured Article: What is a Real Estate Investment Trust (REIT)? 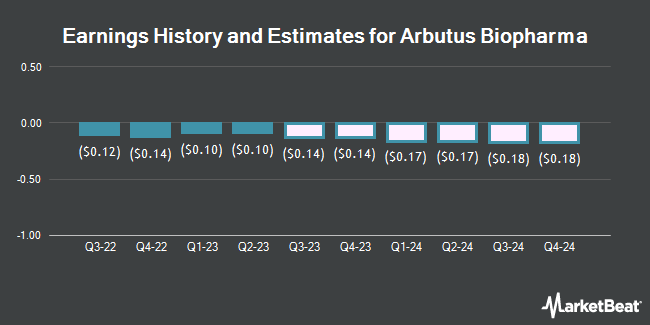 Complete the form below to receive the latest headlines and analysts' recommendations for Arbutus Biopharma with our free daily email newsletter: