$3.04 Million in Sales Expected for Intrusion Inc. (NASDAQ:INTZ) This Quarter

Equities analysts expect Intrusion Inc. (NASDAQ:INTZ) to report $3.04 million in sales for the current quarter, Zacks Investment Research reports. Two analysts have made estimates for Intrusion’s earnings, with the lowest sales estimate coming in at $2.38 million and the highest estimate coming in at $3.70 million. Intrusion reported sales of $1.58 million in the same quarter last year, which would indicate a positive year-over-year growth rate of 92.4%. The firm is scheduled to announce its next quarterly earnings results on Thursday, February 24th.

Intrusion (NASDAQ:INTZ) last released its earnings results on Thursday, November 11th. The company reported ($0.34) EPS for the quarter, missing the Thomson Reuters’ consensus estimate of ($0.25) by ($0.09). Intrusion had a negative return on equity of 167.23% and a negative net margin of 261.81%. The company had revenue of $1.82 million during the quarter, compared to the consensus estimate of $2.31 million. During the same period last year, the firm posted ($0.10) earnings per share.

Intrusion, Inc engages in the provision of network security solutions. It specializes in the development and marketing of entity identification, high speed data mining cybercrime and advanced persistent threat detection products. The company supports a range of customers including United States federal government entities, local government, banks, airlines, credit unions, and other financial institutions as well as hospitals, and other healthcare providers by providing products such as TraceCop for identity discovery and disclosure, and Savant for network data mining and advanced persistent threat detection. 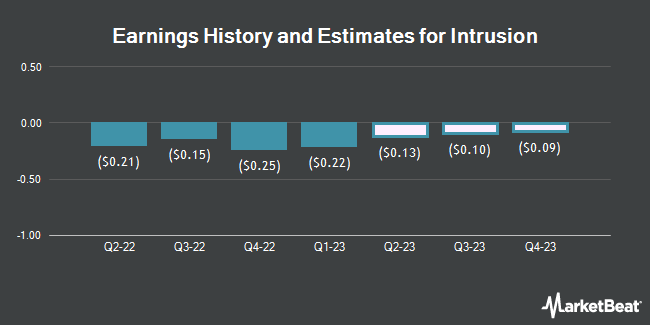 Complete the form below to receive the latest headlines and analysts' recommendations for Intrusion with our free daily email newsletter: