Ferrari (NYSE:RACE) last announced its earnings results on Tuesday, November 2nd. The company reported $1.11 earnings per share for the quarter, topping the Thomson Reuters’ consensus estimate of $1.07 by $0.04. The firm had revenue of $1.24 billion for the quarter, compared to the consensus estimate of $1.26 billion. Ferrari had a return on equity of 42.17% and a net margin of 21.11%. During the same period in the previous year, the business earned $1.08 EPS. As a group, equities research analysts anticipate that Ferrari will post 4.75 earnings per share for the current year.

Ferrari NV is a holding company, which engages in the design, engineering, production, and sale of luxury sports cars. The firm’s models include the F12Berlinetta, 488GTB, 488 Spider, 458 Speciale, California T, the LaFerrari Hybrid, LaFerrari, and the FF four-wheel drive. It participates in car racing such as Formula One.

Recommended Story: What is a Buy-Side Analyst?

Want to see what other hedge funds are holding RACE? Visit HoldingsChannel.com to get the latest 13F filings and insider trades for Ferrari (NYSE:RACE). 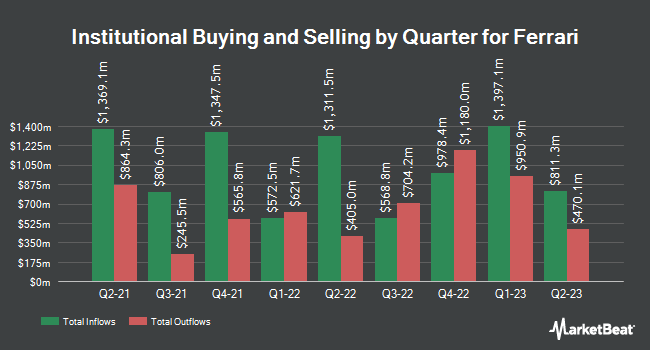 Receive News & Ratings for Ferrari Daily - Enter your email address below to receive a concise daily summary of the latest news and analysts' ratings for Ferrari and related companies with MarketBeat.com's FREE daily email newsletter.

Complete the form below to receive the latest headlines and analysts' recommendations for Ferrari with our free daily email newsletter: