Mackenzie Financial Corp lifted its holdings in SuRo Capital Corp. (NASDAQ:SSSS) by 34.9% during the third quarter, Holdings Channel.com reports. The institutional investor owned 102,089 shares of the company’s stock after acquiring an additional 26,413 shares during the quarter. Mackenzie Financial Corp’s holdings in SuRo Capital were worth $1,318,000 as of its most recent filing with the Securities & Exchange Commission.

In other news, CEO Mark D. Klein purchased 10,000 shares of SuRo Capital stock in a transaction dated Monday, December 13th. The stock was purchased at an average cost of $11.76 per share, for a total transaction of $117,600.00. The purchase was disclosed in a legal filing with the SEC, which is available through this link. Also, insider Allison Green bought 5,860 shares of the business’s stock in a transaction that occurred on Wednesday, December 22nd. The stock was bought at an average price of $12.76 per share, with a total value of $74,773.60. The disclosure for this purchase can be found here. 2.28% of the stock is owned by insiders.

SuRo Capital (NASDAQ:SSSS) last issued its earnings results on Wednesday, November 3rd. The company reported ($0.08) earnings per share (EPS) for the quarter. SuRo Capital had a net margin of 10,823.94% and a negative return on equity of 2.83%. The business had revenue of $0.52 million for the quarter.

Sutter Rock Capital Corp. is specializing in growth capital, B round and beyond, emerging growth, and pre-IPO investments in late stage venture-backed private companies. It makes direct (primary rounds) investments in companies and also makes secondary direct investments. The fund operates as a Business development Company.

Want to see what other hedge funds are holding SSSS? Visit HoldingsChannel.com to get the latest 13F filings and insider trades for SuRo Capital Corp. (NASDAQ:SSSS). 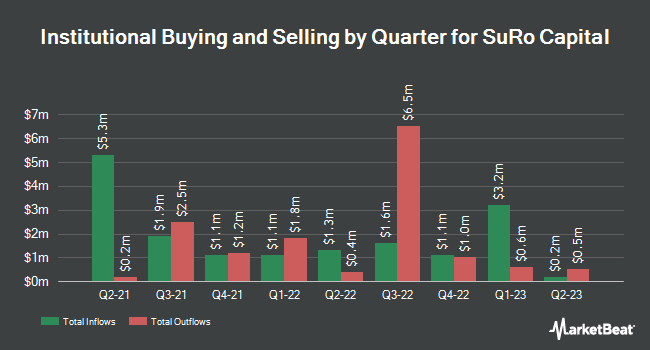 Complete the form below to receive the latest headlines and analysts' recommendations for SuRo Capital with our free daily email newsletter: