According to Zacks, analysts expect that Extra Space Storage will report full year earnings of $7.98 per share for the current fiscal year, with EPS estimates ranging from $7.70 to $8.37. For the next financial year, analysts anticipate that the firm will post earnings of $8.49 per share, with EPS estimates ranging from $8.13 to $9.16. Zacks’ EPS averages are a mean average based on a survey of research firms that cover Extra Space Storage.

Extra Space Storage (NYSE:EXR – Get Rating) last posted its quarterly earnings data on Tuesday, May 3rd. The real estate investment trust reported $1.51 EPS for the quarter, missing analysts’ consensus estimates of $1.86 by ($0.35). Extra Space Storage had a net margin of 50.76% and a return on equity of 23.42%. The company had revenue of $379.81 million for the quarter, compared to analyst estimates of $368.88 million. During the same period in the prior year, the company earned $1.50 EPS. The company’s revenue was up 25.1% compared to the same quarter last year.

The firm also recently announced a quarterly dividend, which was paid on Thursday, March 31st. Investors of record on Tuesday, March 15th were issued a $1.50 dividend. This is an increase from Extra Space Storage’s previous quarterly dividend of $1.25. This represents a $6.00 dividend on an annualized basis and a dividend yield of 3.35%. The ex-dividend date of this dividend was Monday, March 14th. Extra Space Storage’s payout ratio is presently 97.40%.

In other news, Director Kenneth M. Woolley acquired 10,500 shares of Extra Space Storage stock in a transaction that occurred on Monday, March 7th. The stock was purchased at an average price of $200.75 per share, with a total value of $2,107,875.00. The transaction was disclosed in a document filed with the Securities & Exchange Commission, which is available at this hyperlink. Also, CEO Joseph D. Margolis sold 5,000 shares of Extra Space Storage stock in a transaction on Friday, April 1st. The shares were sold at an average price of $208.34, for a total value of $1,041,700.00. Following the sale, the chief executive officer now directly owns 62,035 shares of the company’s stock, valued at approximately $12,924,371.90. The disclosure for this sale can be found here. Insiders have sold 11,625 shares of company stock worth $2,314,085 in the last 90 days. 1.52% of the stock is owned by company insiders.

Extra Space Storage Inc, headquartered in Salt Lake City, Utah, is a self-administered and self-managed REIT and a member of the S&P 500. As of September 30, 2020, the Company owned and/or operated 1,906 self-storage stores in 40 states, Washington, DC and Puerto Rico. The Company's stores comprise approximately 1.4 million units and approximately 147.5 million square feet of rentable space. 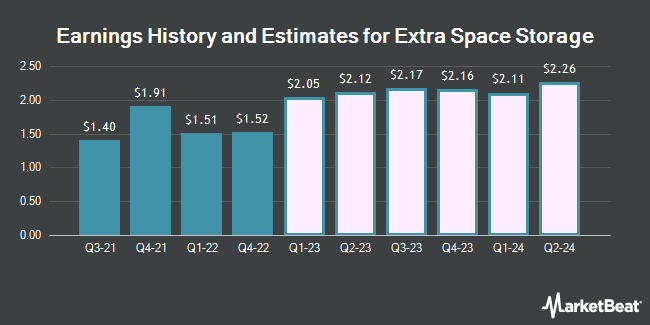 Vossloh Given a €51.00 Price Target by Deutsche Bank Rese… Analysts

Akouos Price Target Cut to $18.00 by Analysts at Piper Sandler

Complete the form below to receive the latest headlines and analysts' recommendations for Extra Space Storage with our free daily email newsletter: