bpost NV/SA (OTCMKTS:BPOSY) Given Consensus Rating of “Hold” by Analysts

Shares of bpost NV/SA (OTCMKTS:BPOSY – Get Rating) have earned a consensus recommendation of “Hold” from the seven ratings firms that are covering the stock, MarketBeat reports. Five analysts have rated the stock with a hold recommendation and one has assigned a buy recommendation to the company. The average 1 year price objective among brokerages that have updated their coverage on the stock in the last year is $7.67.

bpost NV/SA (OTCMKTS:BPOSY – Get Rating) last released its quarterly earnings results on Thursday, February 24th. The company reported $0.47 EPS for the quarter. The business had revenue of $1.49 billion during the quarter. bpost NV/SA had a return on equity of 31.85% and a net margin of 5.85%. As a group, equities research analysts expect that bpost NV/SA will post 1.02 EPS for the current year.

The company also recently announced a dividend, which will be paid on Thursday, June 2nd. Shareholders of record on Tuesday, May 17th will be issued a dividend of $0.3365 per share. The ex-dividend date of this dividend is Monday, May 16th. This represents a dividend yield of 5.32%.

bpost NV/SA, together with its subsidiaries, provides mail and parcel services to consumers, businesses, and government in Belgium, rest of Europe, the United States, and internationally. The company operates in three segments: Mail & Retail; PaLo N. Am.; and PaLo Eurasia. Its mail and parcels services include collection, transport, sorting, and distribution of addressed and non-addressed mail, printed documents, newspapers, and parcels, as well as banking and financial products, e-commerce logistics, express delivery, proximity and convenience, document management, and related services. 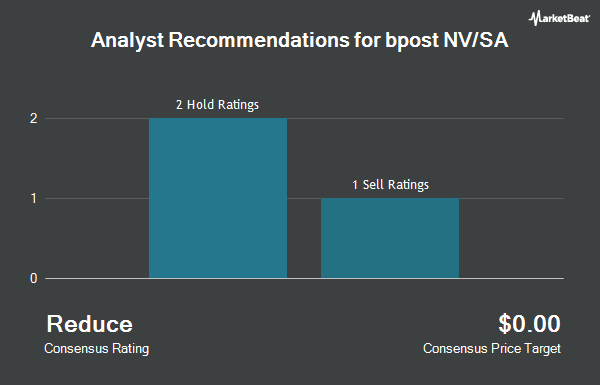 Denny’s Co. Expected to Announce Earnings of $0.15 Per Share

Complete the form below to receive the latest headlines and analysts' recommendations for bpost NV/SA with our free daily email newsletter: