Lindsay Co. (NYSE:LNN – Get Rating) announced a quarterly dividend on Wednesday, April 6th, RTT News reports. Shareholders of record on Tuesday, May 17th will be paid a dividend of 0.33 per share by the industrial products company on Tuesday, May 31st. This represents a $1.32 annualized dividend and a yield of 1.04%. The ex-dividend date is Monday, May 16th.

Lindsay (NYSE:LNN – Get Rating) last posted its quarterly earnings results on Tuesday, April 5th. The industrial products company reported $1.32 EPS for the quarter, beating the consensus estimate of $1.31 by $0.01. The company had revenue of $200.10 million for the quarter, compared to analyst estimates of $187.09 million. Lindsay had a net margin of 6.76% and a return on equity of 16.04%. The firm’s revenue was up 39.3% on a year-over-year basis. During the same period in the prior year, the company earned $1.08 earnings per share. Equities analysts anticipate that Lindsay will post 5.05 EPS for the current fiscal year.

In related news, insider James Scott Marion sold 1,945 shares of the business’s stock in a transaction on Friday, April 8th. The shares were sold at an average price of $146.01, for a total value of $283,989.45. Following the completion of the transaction, the insider now directly owns 4,520 shares in the company, valued at approximately $659,965.20. The transaction was disclosed in a document filed with the SEC, which is accessible through the SEC website. 0.91% of the stock is owned by insiders.

Separately, StockNews.com began coverage on Lindsay in a report on Thursday, March 31st. They set a “hold” rating on the stock. 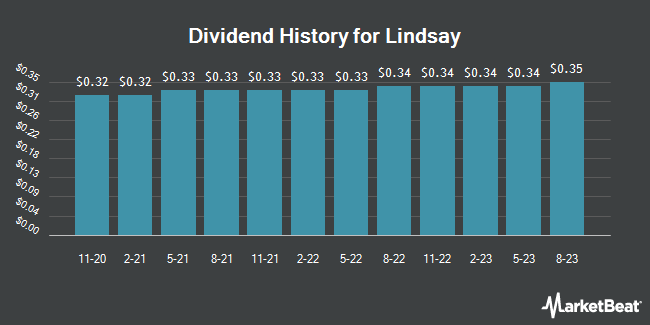 Receive News & Ratings for Lindsay Daily - Enter your email address below to receive a concise daily summary of the latest news and analysts' ratings for Lindsay and related companies with MarketBeat.com's FREE daily email newsletter.

Complete the form below to receive the latest headlines and analysts' recommendations for Lindsay with our free daily email newsletter: