TRACON Pharmaceuticals (NASDAQ:TCON – Get Rating) announced its quarterly earnings results on Wednesday. The biopharmaceutical company reported ($0.48) EPS for the quarter, missing the consensus estimate of ($0.41) by ($0.07), MarketWatch Earnings reports. During the same quarter last year, the business earned ($0.33) earnings per share.

In other TRACON Pharmaceuticals news, major shareholder Opaleye Management Inc. acquired 42,000 shares of the business’s stock in a transaction on Friday, April 22nd. The stock was purchased at an average price of $2.24 per share, for a total transaction of $94,080.00. Following the transaction, the insider now owns 2,910,000 shares in the company, valued at approximately $6,518,400. The transaction was disclosed in a document filed with the SEC, which can be accessed through this hyperlink. In the last quarter, insiders acquired 109,122 shares of company stock valued at $240,215. Corporate insiders own 23.30% of the company’s stock.

TRACON Pharmaceuticals, Inc, a biopharmaceutical company, focuses on the development and commercialization of therapeutics for cancer in the United States. Its clinical stage products include envafolimab (KN035), a PD-L1 single-domain antibody for the treatment of soft tissue sarcoma; and YH001, an investigational humanized CTLA-4 IgG1 monoclonal antibody for the treatment of various cancer indications. 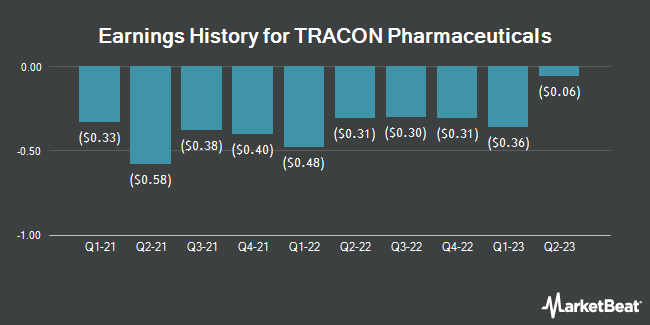 Complete the form below to receive the latest headlines and analysts' recommendations for TRACON Pharmaceuticals with our free daily email newsletter: