Plexus Corp. (NASDAQ:PLXS) Given Consensus Recommendation of “Buy” by Analysts

Shares of Plexus Corp. (NASDAQ:PLXS – Get Rating) have earned an average rating of “Buy” from the eight ratings firms that are covering the company, MarketBeat Ratings reports. Three analysts have rated the stock with a hold recommendation and four have given a buy recommendation to the company. The average 12-month target price among analysts that have updated their coverage on the stock in the last year is $98.12.

Plexus (NASDAQ:PLXS – Get Rating) last announced its earnings results on Wednesday, April 27th. The technology company reported $0.95 earnings per share for the quarter, topping analysts’ consensus estimates of $0.83 by $0.12. Plexus had a return on equity of 11.05% and a net margin of 3.31%. The business had revenue of $888.70 million for the quarter, compared to analyst estimates of $839.76 million. During the same period in the prior year, the company earned $1.49 EPS. The company’s quarterly revenue was up .9% compared to the same quarter last year. Research analysts expect that Plexus will post 4.1 earnings per share for the current fiscal year.

About Plexus (Get Rating)

Plexus Corp., together with its subsidiaries, provides electronic manufacturing services in the Americas, Europe, the Middle East, Africa, and the Asia-Pacific. It offers design and development, supply chain, new product introduction, and manufacturing solutions, as well as aftermarket services to companies in the healthcare/life sciences, industrial/commercial, aerospace/defense, and communications market sectors. 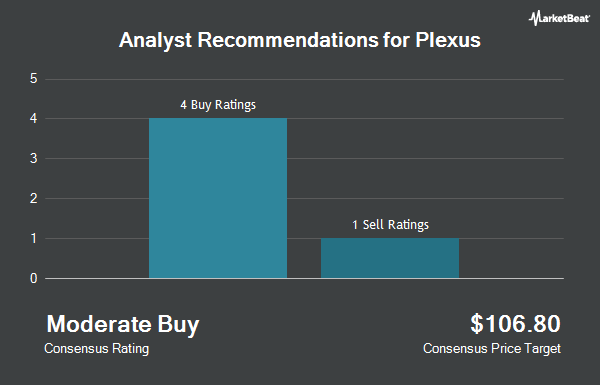 Receive News & Ratings for Plexus Daily - Enter your email address below to receive a concise daily summary of the latest news and analysts' ratings for Plexus and related companies with MarketBeat.com's FREE daily email newsletter.

Q2 2022 EPS Estimates for The Middleby Co. Cut by Analyst

Complete the form below to receive the latest headlines and analysts' recommendations for Plexus with our free daily email newsletter: