REX American Resources (NYSE:REX – Get Rating) issued its earnings results on Wednesday. The energy company reported $0.87 EPS for the quarter, topping the consensus estimate of $0.82 by $0.05, MarketWatch Earnings reports. REX American Resources had a return on equity of 10.86% and a net margin of 6.76%. During the same period last year, the business posted $1.30 earnings per share.

In other news, CFO Douglas Bruggeman sold 1,100 shares of REX American Resources stock in a transaction dated Friday, March 25th. The stock was sold at an average price of $104.55, for a total value of $115,005.00. The transaction was disclosed in a document filed with the Securities & Exchange Commission, which can be accessed through the SEC website. Company insiders own 11.50% of the company’s stock.

About REX American Resources (Get Rating)

REX American Resources Corporation, together with its subsidiaries, produces and sells ethanol in the United States. The company also offers corn, distillers grains, non-food grade corn oil, gasoline, and natural gas. In addition, the company provides dry distillers grains with solubles, which is used as a protein in animal feed. 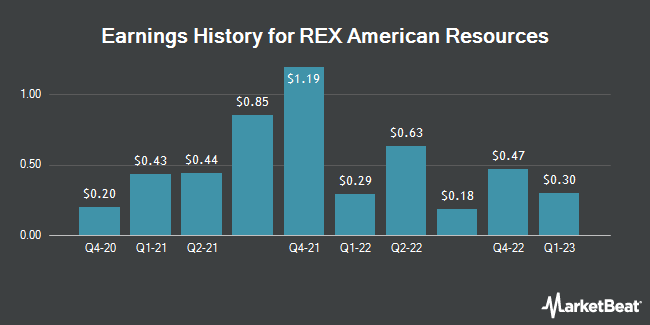 Complete the form below to receive the latest headlines and analysts' recommendations for REX American Resources with our free daily email newsletter: