Shares of Vinci SA (OTCMKTS:VCISY – Get Rating) have received a consensus rating of “Buy” from the nine analysts that are covering the stock, MarketBeat reports. Eight analysts have rated the stock with a buy rating. The average 1-year price target among analysts that have covered the stock in the last year is $115.33.

The firm also recently disclosed a dividend, which was paid on Friday, May 13th. Investors of record on Monday, April 25th were paid a $0.469 dividend. The ex-dividend date of this dividend was Friday, April 22nd. This is a positive change from Vinci’s previous dividend of $0.12. This represents a yield of 2.49%.

VINCI SA, together with its subsidiaries, operates in the concessions, energy, and construction segments primarily in France. It Concessions segment operates motorway concessions with a network of 4,419 kilometers in France; 45 airports; 4,437 kilometers of motorways; highways, railways, and 4 stadiums, as well as operates airports in France and in 11 other countries. 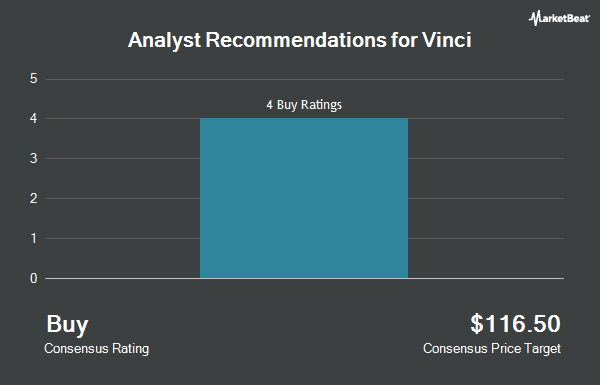 Receive News & Ratings for Vinci Daily - Enter your email address below to receive a concise daily summary of the latest news and analysts' ratings for Vinci and related companies with MarketBeat.com's FREE daily email newsletter.

Complete the form below to receive the latest headlines and analysts' recommendations for Vinci with our free daily email newsletter: