Wall Street brokerages expect that Denny’s Co. (NASDAQ:DENN – Get Rating) will report $110.84 million in sales for the current fiscal quarter, according to Zacks Investment Research. Five analysts have provided estimates for Denny’s’ earnings. The highest sales estimate is $113.40 million and the lowest is $107.10 million. Denny’s posted sales of $106.17 million during the same quarter last year, which suggests a positive year over year growth rate of 4.4%. The company is expected to report its next earnings results on Monday, January 1st.

Denny’s (NASDAQ:DENN – Get Rating) last issued its earnings results on Tuesday, May 3rd. The restaurant operator reported $0.11 earnings per share for the quarter, missing analysts’ consensus estimates of $0.13 by ($0.02). The business had revenue of $103.10 million during the quarter, compared to analysts’ expectations of $102.13 million. Denny’s had a negative return on equity of 52.44% and a net margin of 18.24%. Denny’s’s quarterly revenue was up 27.9% compared to the same quarter last year. During the same period last year, the firm posted $0.01 EPS.

A number of research analysts recently commented on DENN shares. Zacks Investment Research raised Denny’s from a “sell” rating to a “hold” rating in a report on Wednesday, May 4th. Citigroup started coverage on Denny’s in a report on Tuesday, April 12th. They set a “neutral” rating and a $15.00 price target on the stock. Deutsche Bank Aktiengesellschaft cut their price objective on Denny’s from $16.00 to $13.00 in a research report on Monday, May 9th. Finally, StockNews.com raised Denny’s from a “hold” rating to a “buy” rating in a report on Monday, May 9th. Three equities research analysts have rated the stock with a hold rating and six have given a buy rating to the stock. According to data from MarketBeat, Denny’s currently has an average rating of “Buy” and an average target price of $17.75.

Denny's Corporation, through its subsidiary, Denny's, Inc, owns and operates full-service restaurant chains under the Denny's brand. As of December 29, 2021, it had 1,640 franchised, licensed, and company restaurants worldwide. The company was formerly known as Advantica Restaurant Group, Inc and changed its name to Denny's Corporation in 2002. 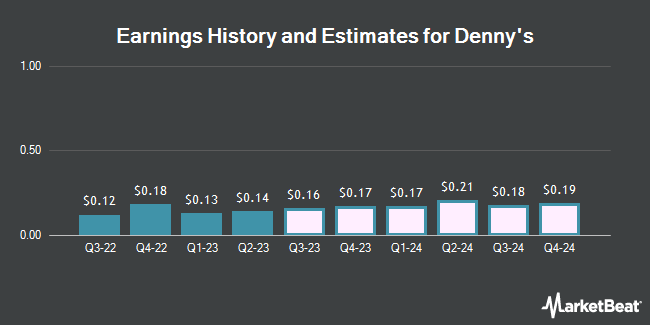 Receive News & Ratings for Denny's Daily - Enter your email address below to receive a concise daily summary of the latest news and analysts' ratings for Denny's and related companies with MarketBeat.com's FREE daily email newsletter.

Complete the form below to receive the latest headlines and analysts' recommendations for Denny's with our free daily email newsletter: