Plantronics (NYSE:POLY – Get Rating) released its quarterly earnings results on Friday. The company reported $0.50 earnings per share for the quarter, missing analysts’ consensus estimates of $0.56 by ($0.06), Briefing.com reports. The business had revenue of $421.00 million during the quarter, compared to analyst estimates of $423.51 million. Plantronics had a negative return on equity of 212.42% and a net margin of 3.44%. The firm’s revenue for the quarter was down 11.9% on a year-over-year basis.

A number of equities analysts recently weighed in on the company. StockNews.com assumed coverage on Plantronics in a report on Thursday, March 31st. They issued a “hold” rating for the company. JPMorgan Chase & Co. cut Plantronics from an “overweight” rating to a “neutral” rating and upped their price target for the stock from $33.00 to $40.00 in a report on Tuesday, March 29th. Finally, TheStreet raised Plantronics from a “d+” rating to a “c-” rating in a report on Friday, April 22nd. Five investment analysts have rated the stock with a hold rating, Based on data from MarketBeat, Plantronics has an average rating of “Hold” and an average target price of $34.25.

In other news, Director Guido Jouret sold 800 shares of the company’s stock in a transaction that occurred on Tuesday, May 17th. The stock was sold at an average price of $39.35, for a total value of $31,480.00. Following the completion of the sale, the director now directly owns 21,226 shares in the company, valued at $835,243.10. The transaction was disclosed in a document filed with the Securities & Exchange Commission, which is available through the SEC website. 1.50% of the stock is owned by corporate insiders.

About Plantronics (Get Rating)

Plantronics, Inc designs, manufactures, markets, and sells integrated communications and collaborations solutions for corporate customers, small businesses, and individuals in the United States, Europe, the Middle East, Africa, the Asia Pacific, and rest of the Americas. Its principal product categories include headsets, which comprises wired and wireless communication headsets; voice that includes open session initiation protocol and native ecosystem desktop phones, and conference room phones; video conferencing solutions and peripherals, including cameras, speakers, and microphones designed to work with a range of unified communication and collaboration, unified communication as a service, and video as a service environments, including RealPresence collaboration solutions of infrastructure to endpoints that allows people to connect and collaborate; and content sharing solutions. 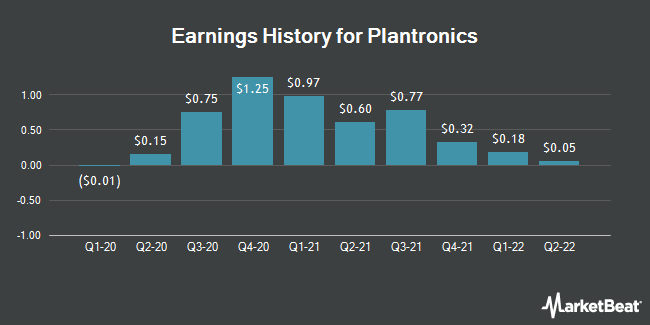 Complete the form below to receive the latest headlines and analysts' recommendations for Plantronics with our free daily email newsletter: