American Vanguard Co. (NYSE:AVD – Get Rating) declared a quarterly dividend on Monday, June 6th, Zacks reports. Investors of record on Friday, June 24th will be given a dividend of 0.025 per share by the basic materials company on Friday, July 8th. This represents a $0.10 annualized dividend and a yield of 0.46%. The ex-dividend date of this dividend is Thursday, June 23rd.

American Vanguard (NYSE:AVD – Get Rating) last posted its quarterly earnings data on Wednesday, May 4th. The basic materials company reported $0.33 EPS for the quarter, beating the consensus estimate of $0.20 by $0.13. The business had revenue of $149.44 million for the quarter, compared to the consensus estimate of $130.50 million. American Vanguard had a return on equity of 6.82% and a net margin of 4.31%. During the same quarter in the prior year, the business earned $0.10 earnings per share. As a group, equities research analysts forecast that American Vanguard will post 1.05 earnings per share for the current fiscal year.

Separately, StockNews.com assumed coverage on American Vanguard in a research report on Thursday, March 31st. They issued a “strong-buy” rating on the stock.

About American Vanguard (Get Rating) 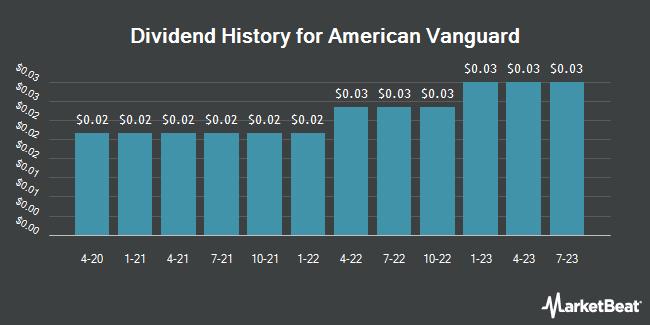 Complete the form below to receive the latest headlines and analysts' recommendations for American Vanguard with our free daily email newsletter: