Howmet Aerospace (NYSE:HWM – Get Rating) released its earnings results on Thursday. The company reported $0.35 earnings per share for the quarter, beating analysts’ consensus estimates of $0.33 by $0.02, Briefing.com reports. The business had revenue of $1.39 billion during the quarter, compared to the consensus estimate of $1.37 billion. Howmet Aerospace had a net margin of 6.07% and a return on equity of 13.73%. The firm’s revenue for the quarter was up 16.6% compared to the same quarter last year. During the same quarter last year, the firm earned $0.22 earnings per share.

The company also recently declared a quarterly dividend, which will be paid on Thursday, August 25th. Shareholders of record on Friday, August 5th will be paid a $0.02 dividend. This represents a $0.08 dividend on an annualized basis and a yield of 0.22%. The ex-dividend date is Thursday, August 4th. Howmet Aerospace’s dividend payout ratio is currently 11.11%.

In other news, CFO Ken Giacobbe sold 63,304 shares of the firm’s stock in a transaction dated Friday, June 3rd. The shares were sold at an average price of $36.31, for a total transaction of $2,298,568.24. Following the completion of the sale, the chief financial officer now owns 382,379 shares in the company, valued at approximately $13,884,181.49. The transaction was disclosed in a filing with the SEC, which is accessible through this link. 0.64% of the stock is currently owned by corporate insiders. 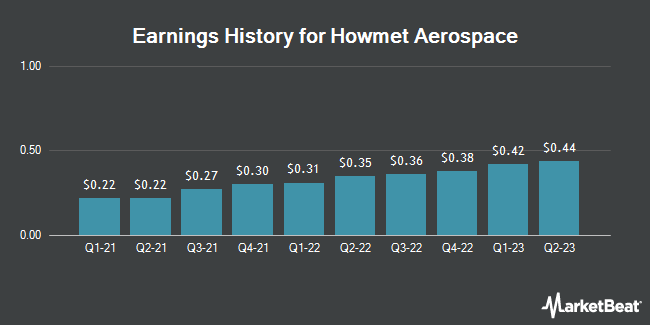 Complete the form below to receive the latest headlines and analysts' recommendations for Howmet Aerospace with our free daily email newsletter: