Cardinal Health (NYSE:CAH – Get Rating) issued an update on its FY 2023 earnings guidance on Friday. The company provided EPS guidance of $5.05-$5.40 for the period, compared to the consensus EPS estimate of $5.32. The company issued revenue guidance of -.

Cardinal Health (NYSE:CAH – Get Rating) last announced its earnings results on Thursday, August 11th. The company reported $1.05 EPS for the quarter, missing the consensus estimate of $1.17 by ($0.12). Cardinal Health had a positive return on equity of 568.57% and a negative net margin of 0.51%. The firm had revenue of $47.10 billion during the quarter, compared to analyst estimates of $44.82 billion. During the same quarter in the previous year, the business earned $0.77 earnings per share. The business’s quarterly revenue was up 10.6% compared to the same quarter last year. On average, research analysts predict that Cardinal Health will post 5.27 EPS for the current fiscal year.

The business also recently declared a quarterly dividend, which will be paid on Saturday, October 15th. Investors of record on Monday, October 3rd will be issued a dividend of $0.4957 per share. This represents a $1.98 annualized dividend and a dividend yield of 3.02%. The ex-dividend date is Friday, September 30th. Cardinal Health’s dividend payout ratio is currently 29.73%. 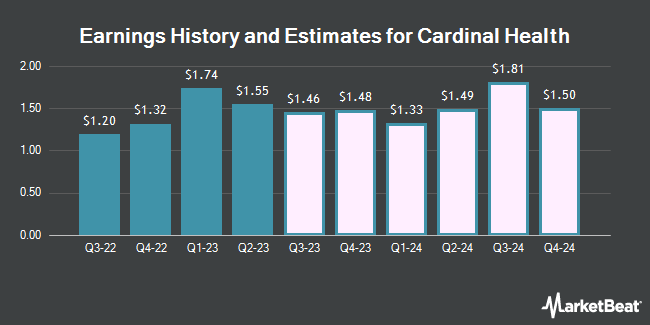 Complete the form below to receive the latest headlines and analysts' recommendations for Cardinal Health with our free daily email newsletter: