Xos, Inc. (NASDAQ:XOS – Get Rating) has earned a consensus recommendation of “Moderate Buy” from the six analysts that are covering the firm, MarketBeat reports. One research analyst has rated the stock with a sell rating, one has issued a hold rating and four have issued a buy rating on the company. The average twelve-month price target among analysts that have issued ratings on the stock in the last year is $5.35.

In other news, CTO Robert Ferber sold 14,533 shares of the business’s stock in a transaction on Monday, August 1st. The stock was sold at an average price of $1.77, for a total transaction of $25,723.41. Following the completion of the transaction, the chief technology officer now owns 550,512 shares of the company’s stock, valued at approximately $974,406.24. The transaction was disclosed in a legal filing with the Securities & Exchange Commission, which is available through this link. 54.60% of the stock is owned by insiders.

Institutional Investors Weigh In On XOS

XOS (NASDAQ:XOS – Get Rating) last posted its quarterly earnings results on Thursday, August 11th. The company reported ($0.13) earnings per share for the quarter, meeting analysts’ consensus estimates of ($0.13). The firm had revenue of $9.77 million during the quarter, compared to the consensus estimate of $10.00 million. XOS had a negative return on equity of 15.72% and a net margin of 76.66%. As a group, equities research analysts predict that XOS will post -0.51 EPS for the current year.

Xos, Inc, a mobility solutions company, manufactures and sells battery-electric commercial vehicles. It offers a range of services to facilitate the transition of fleets to electric vehicles, including charging infrastructure, vehicle maintenance, financing, and service. The company was founded in 2020 and is headquartered in Los Angeles, California. 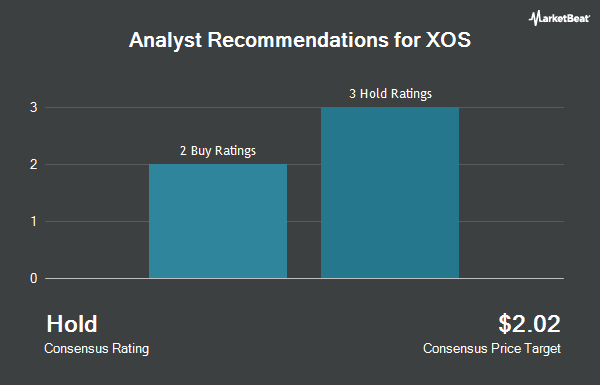 Receive News & Ratings for XOS Daily - Enter your email address below to receive a concise daily summary of the latest news and analysts' ratings for XOS and related companies with MarketBeat.com's FREE daily email newsletter.

Complete the form below to receive the latest headlines and analysts' recommendations for XOS with our free daily email newsletter: