Hibbett (NASDAQ:HIBB – Get Rating) last released its quarterly earnings results on Thursday, August 25th. The company reported $1.86 earnings per share for the quarter, missing the consensus estimate of $2.26 by ($0.40). Hibbett had a net margin of 6.76% and a return on equity of 34.89%. The company had revenue of $392.80 million during the quarter, compared to analyst estimates of $394.44 million. During the same quarter last year, the company earned $2.86 EPS. The firm’s quarterly revenue was down 6.3% compared to the same quarter last year. As a group, equities research analysts anticipate that Hibbett will post 9.79 earnings per share for the current year.

Hedge Funds Weigh In On Hibbett

Hibbett, Inc together with its subsidiaries, engages in the retail of athletic-inspired fashion products in small and mid-sized communities in the United States. Its stores offer a range of merchandise, including athletic footwear, athletic and fashion apparel, team sports equipment, and related accessories. 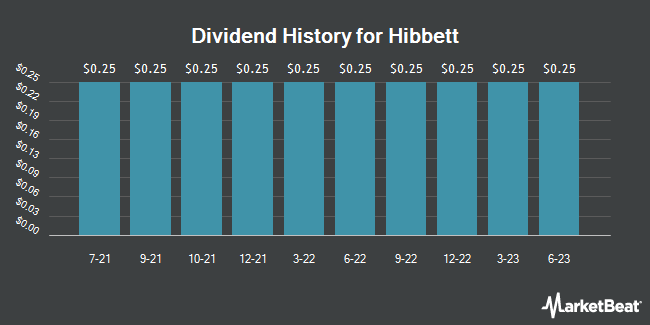 Receive News & Ratings for Hibbett Daily - Enter your email address below to receive a concise daily summary of the latest news and analysts' ratings for Hibbett and related companies with MarketBeat.com's FREE daily email newsletter.

Complete the form below to receive the latest headlines and analysts' recommendations for Hibbett with our free daily email newsletter: