United-Guardian has increased its dividend by an average of 2.5% annually over the last three years.

United-Guardian, Inc manufactures and markets cosmetic ingredients, pharmaceuticals, medical lubricants, and proprietary specialty industrial products in the United States and internationally. The company offers cosmetic ingredients, including LUBRAJEL line of water-based moisturizing and lubricating gel formulations; LUBRAJEL NATURAL consisting of natural ingredients for cosmetic use; LUBRAJEL MARINE; LUBRASIL II SB, a special formulation of LUBRAJEL in which silicone oil is incorporated into a LUBRAJEL base; LUBRAJEL II XD; B-122, a powdered lubricant that is used in the manufacture of pressed powders, eyeliners, rouges, and industrial products; KLENSOFT, a surfactant, which is used in shampoos, shower gels, makeup removers, and other cosmetic formulations; and ORCHID COMPLEX, an oil-soluble base for skin creams, lotions, cleansers, and other cosmetics. 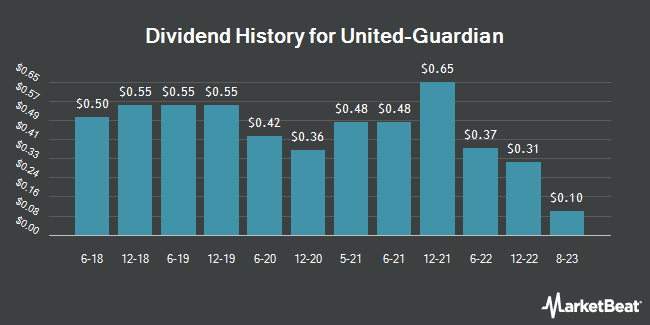 Complete the form below to receive the latest headlines and analysts' recommendations for United-Guardian with our free daily email newsletter: