Marten Transport (NASDAQ:MRTN – Get Rating) issued its quarterly earnings results on Tuesday. The transportation company reported $0.31 EPS for the quarter, topping analysts’ consensus estimates of $0.30 by $0.01, Briefing.com reports. The business had revenue of $322.58 million during the quarter, compared to the consensus estimate of $318.20 million. Marten Transport had a net margin of 9.07% and a return on equity of 16.58%. The company’s quarterly revenue was up 20.9% compared to the same quarter last year. During the same period in the previous year, the firm posted $0.30 earnings per share.

A number of brokerages have recently commented on MRTN. StockNews.com downgraded shares of Marten Transport from a “buy” rating to a “hold” rating in a report on Thursday, January 5th. Stephens boosted their target price on shares of Marten Transport from $23.00 to $25.00 and gave the company an “overweight” rating in a report on Tuesday, October 18th.

Marten Transport, Ltd. operates as a temperature-sensitive truckload carrier for shippers in the United States, Canada, and Mexico. It operates through four segments: Truckload, Dedicated, Intermodal, and Brokerage. The Truckload segment transports food and other consumer packaged goods that require a temperature-controlled or insulated environment. 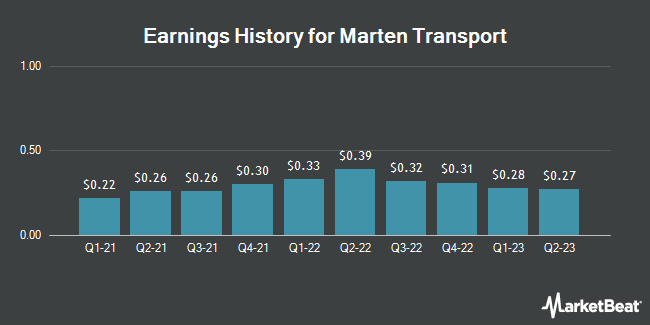 Complete the form below to receive the latest headlines and analysts' recommendations for Marten Transport with our free daily email newsletter: