Natera, Inc. (NASDAQ:NTRA – Get Rating) CEO Steven Leonard Chapman sold 5,370 shares of the business’s stock in a transaction that occurred on Monday, January 23rd. The stock was sold at an average price of $41.56, for a total value of $223,177.20. Following the sale, the chief executive officer now owns 103,779 shares of the company’s stock, valued at $4,313,055.24. The transaction was disclosed in a legal filing with the SEC, which is available at this link.

Natera (NASDAQ:NTRA – Get Rating) last announced its quarterly earnings data on Tuesday, November 8th. The medical research company reported ($1.25) earnings per share (EPS) for the quarter, beating the consensus estimate of ($1.42) by $0.17. The business had revenue of $210.64 million for the quarter, compared to analysts’ expectations of $208.31 million. Natera had a negative return on equity of 109.07% and a negative net margin of 70.34%. On average, equities analysts predict that Natera, Inc. will post -5.64 EPS for the current year.

NTRA has been the subject of a number of analyst reports. BTIG Research dropped their price target on Natera from $95.00 to $75.00 in a research report on Wednesday, November 9th. StockNews.com began coverage on Natera in a report on Wednesday, October 12th. They issued a “sell” rating on the stock. Raymond James upgraded Natera from a “market perform” rating to an “outperform” rating and set a $58.00 price objective on the stock in a report on Wednesday, January 18th. Piper Sandler reiterated an “overweight” rating and issued a $70.00 price objective on shares of Natera in a report on Tuesday, January 17th. Finally, Credit Suisse Group decreased their price objective on Natera from $70.00 to $55.00 and set an “outperform” rating on the stock in a report on Monday, November 14th. One research analyst has rated the stock with a sell rating and seven have assigned a buy rating to the stock. According to MarketBeat.com, the company has a consensus rating of “Moderate Buy” and an average price target of $81.67.

Hedge Funds Weigh In On Natera

Natera, Inc, a diagnostics company, develops and commercializes molecular testing services worldwide. It offers Panorama, a non-invasive prenatal test that screens for chromosomal abnormalities of a fetus with a blood draw from the mother, as well as twin pregnancies for zygosity; Vistara, a single-gene mutations screening test to identify single-gene disorder; Horizon carrier screening to determine carrier status for various genetic diseases; and Spectrum to identify chromosomal anomalies or inherited genetic conditions during an in vitro fertilization cycle. 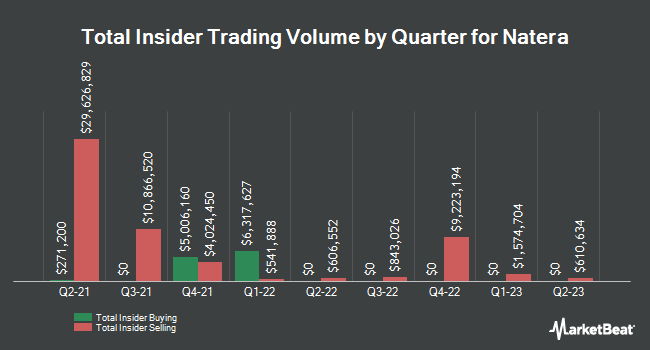